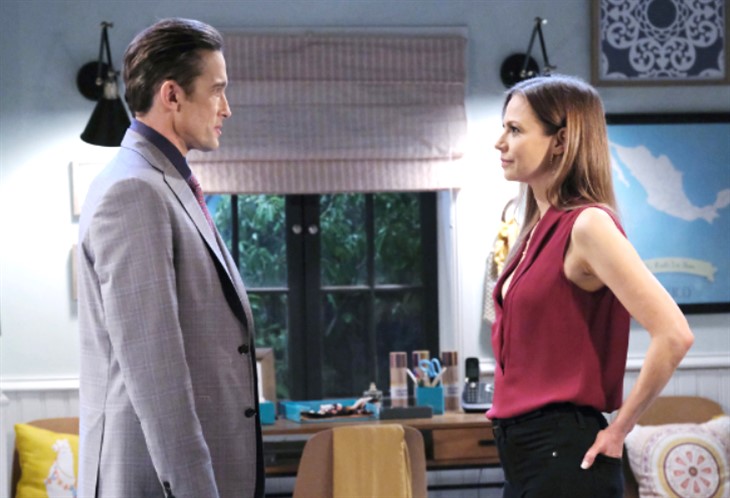 Days of Our Lives (DOOL) spoilers for Wednesday, October 6, 2021, reveal in Salem Ava Vitali using the ace she has in the sleeve on Philip Kiriakis.

Days of Our Lives Spoilers – Ava Is Still Being Ava

Ava (Tamara Braun) loves living with Rafe Hernandez (Galen Gering) and is very characteristically becoming obsessed with him. That’s why she hates living with his sister, Gabi Hernandez (Camila Banus) — and that boyfriend of hers she knows a thing or two about. Gabi doesn’t like her either and she doesn’t want Gabi turning Rafe against her, so why not hurt both Gabi and Jake?

Ava can do that easily by giving Philip (Jay Kenneth Johnson) a little bit of information about Jake DiMera (Brandon Barash) he never knew before. He was a trained hitman for the mob in Philadelphia. Considering that Ava knows a thing or 10 about the mob, it’s not surprising at all that she knows all about Jake and she loves using what she knows to her advantage.

The Kiriakis mansion becomes a little more full when Maggie Simmons Horton Kiriakis returns to town. She’s been gone for most of the year as actress Suzanne Rogers recovered from an illness and now Maggie has some bad news upon her return.

Is it about one of her daughters? Sarah Horton (Linsey Godfrey) is still out there missing although people have yet to figure out that Kristen DiMera (Stacy Haiduk) kidnapped her, but she also has a daughter named Summer (Marie Wilson) who was not doing very well health-wise the last we heard.

As Xander (Paul Telfer) still wastes away in the Salem PD interrogation room, he needs Justin Kiriakis’s (Wally Kurth) help more than ever. He also has a plot to make things work out in his favor and Gwen (Emily O’Brien) is there to help. In fact, she’s willing to do anything to prove her loyalty to the new man in her life.

Will this new plan end up getting Justin in trouble? And might this plan help Bonnie Lockhart (Judi Evans), which could be a reason for Justin to agree to a deal with his scheming cousin? Stay tuned to Days of Our Lives weekdays to see how these stories play out.