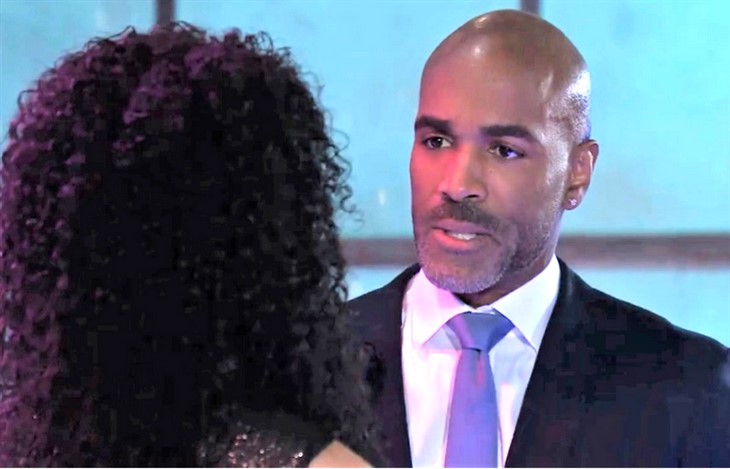 General Hospital (GH) spoilers and updates tease Curtis Ashford (Donnell Turner) wants to do what is right for the ones he cares about. Curtis is the close friend of Nina Reeves (Cynthia Watros). Curtis had been in a relationship with Commissioner Jordan Ashford (Briana Nicole Henry).

Curtis has been in the process of getting a divorce from Jordan on General Hospital. Curtis could not stay with Jordan because she was keeping secrets from him. Curtis decided that he did not want to be a private investigator and brought a nightclub called The Savoy. Curtis has been trying to find out if he could have a relationship with Dr. Portia Robinson (Brook Kerr).

Curtis has been getting closer to Portia. Curtis turned to Portia for help when his friend and former partner in his PI firm Sam McCall (Kelly Monaco) needed help. Sam is searching for Drew Cain (Cameron Mathison). Curtis wants to find Drew because he was his close friend.

Curtis needed help to investigate a lead and needed Portia to help him because she is a doctor. Curtis and Portia found that Jordan was looking into another angle of the same case. Jordan got hurt during the investigation. Portia and Curtis were able to save Jordan. Portia does not know if Curtis still wants to try to have a relationship with her. Curtis still cares about Jordan but he does want to continue to pursue his relationship with Portia. Curtis wants to share more about himself with Portia and spend time with her.

Curtis has been concerned about Nina who has been having trouble. Nina kept the secret that Sonny Corinthos (Maurice Benard) was alive for months from his loved ones. Curtis was surprised that Nina had kept the secret but he wanted to be a friend to her. Curtis showed his support for Nina when Michael Corinthos (Chad Duell) and Willow Tait (Katelyn MacMullen) confronted her about keeping the secret that Sonny was alive from them.

Michael and Willow are trying to decide if Nina should be a part of their son and her grandson Wiley Quartermaine-Corinthos’ (Caleb and Kyler Ends) life. Curtis urged Michael and Willow to consider giving Nina another chance and let her stay in Wiley’s life. Curtis has offered to help Nina and to help her to decide what she needs to do about getting her life back together.

Can Curtis find a way to help Nina to put her mistakes behind her and have a good future? Be sure to catch up on everything happening with GH right now. Come back here often for General Hospital spoilers, news, and updates.