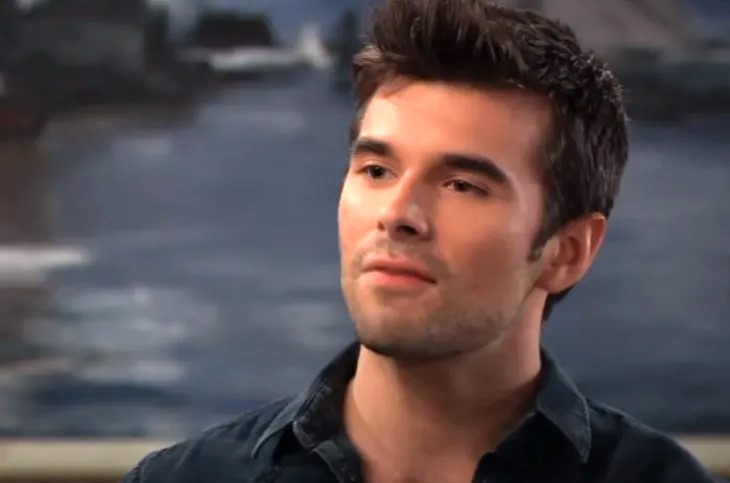 It looks like Austin (Roger Howarth) knew just what he was doing when he spied Chase (Josh Swickard) standing on his own two feet and suggested he give this news to Willow (Katelyn MacMullen). He even offered to get Chase to the gatehouse without his wheelchair with complete knowledge that Michael (Chad Duell) was there with Willow.

Michael and Willow also chose a very odd time to have sex. She was grieving the son who was born and died three years ago today and was in complete hysterics. Apparently, Michael can make all that grief go away with his magic touch.

As Willow tells Michael that her life is with him now, Chase and Austin are downstairs and Chase can’t wait to share his news. Will he wonder why Michael might emerge from the upstairs rooms shirtless and why Willow might have her blouse buttoned wrong when she breathlessly enters the living room?

There are no customers in the Tan-O again as Nina (Cynthia Watros) has a birthday chat with Wiley via video call. Sonny (Maurice Benard) can’t wait to say hi to her little grandson, but Carly (Laura Wright)and Brook Lynn (Amanda Setton) are also on the call so Nina can’t let that happen.

Imagine Carly’s shock if she did. She might think she was imagining things just like Jax (Ingo Rademacher) did and wonder if technology superimposed Sonny in the scene. Maybe Nina could use that excuse if she gets caught.

Now that Curtis (Donnell Turner) knows Jordan (Briana Nicole Henry) would have never signed the divorce papers if she didn’t see him kissing Portia (Brook Kerr), he’s intrigued. Thanks to Curtis being intrigued, Jordan asks Curtis to fight for their marriage, telling him that finalizing the divorce might be the biggest mistake they ever make. It’s a good thing Aunt Stella (Vernee Watson) made sure those divorce papers were never mailed.

Meanwhile, Trina (Sydney Mikayla) feels betrayed by something new she learns. Does it have anything to do with her mother and Curtis? Stay tuned to General Hospital weekdays to see how these stories play out.