Days Of Our Lives Spoilers: John Has The Fear Of The Devil In Him 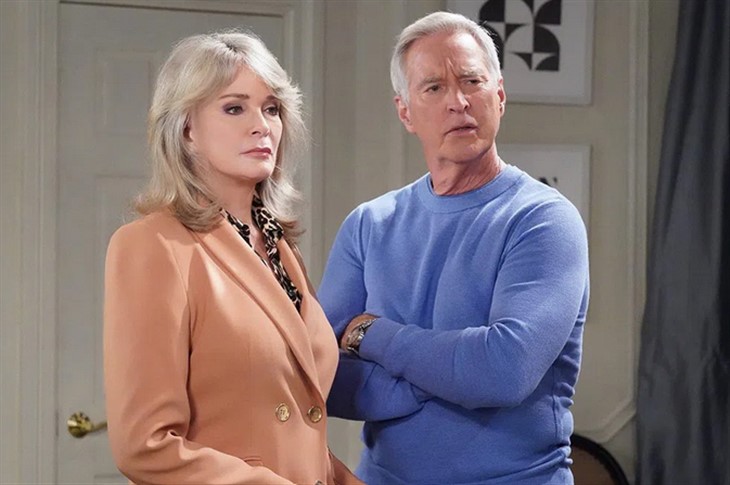 Days of Our Lives (DOOL) spoilers for Friday, September 24, 2021, reveal in Salem John Black racing against time to stop Johnny DiMera from making his movie.

Days Of Our Lives Spoilers – History Repeating Itself?

Just the idea of Johnny DiMera (Carson Boatman) revisiting the distant past when the Devil chose to possess Marlena Evans (Deidre Hall) has John’s (Drake Hogestyn) heart racing. It was difficult enough for him to speak about it with Allie Horton (Lindsay Arnold). The Devil has stayed away for so long now and John wants to keep it that way. He also knows that if there’s even one little opening, the Devil may find his way back into their lives and Johnny’s little film can be a big, big opening.

It’s a good thing someone else wants to stop Johnny just as much as John does but for very different reasons. Johnny’s dad, EJ (Daniel Feuerriegel), just wants his son to be sensible and work for the family business and he needs him to abandon his idea of becoming a filmmaker. Can John and EJ team up to stop Johnny even if they have different motives?

DOOL Spoilers – Doug Williams Takes A Turn For The Worse

The Devil may have left Doug’s (Bill Hayes) body to enter Marlena’s but that doesn’t mean Doug is out of the woods. That little possession took quite a toll on Doug’s body and Julie (Susan Seaforth Hayes) and the doctors are so confused about what’s been going on. On Friday, Julie makes a big mistake — inadvertently — and Doug takes a turn for the worse. Will they both survive this?

Ciara (Victoria Konefal) is baby crazy and determined that she and Ben (Robert Scott Wilson) get this show on the road and make one so they can become parents right away. They wasted too much time over the last year to waste any more time, so no time like the present to get pregnant.

The problem is Ben. He is not sure he is ready to be a father and wonders if someone with his family history should even bring children into this world. Ben does his best to let Ciara know this, but will any of it sink in? Stay tuned to Days of Our Lives weekdays to see how these stories play out.