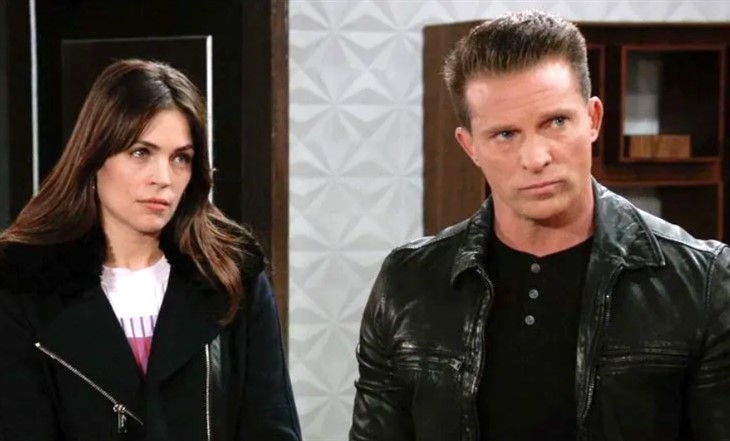 General Hospital spoilers indicate that Britt Westbourne (Kelly Thiebaud) is about to go searching for her mother, Liesl Obrecht (Kathleen Gati) in Greece. Will Britt get in over her head?

General Hospital’s Britt knows that something is wrong that her mother has not turned up. Britt will eventually learn that Liesl is in Greece and will search for her there. Little does Britt know that Liesl is probably on Cassadine Island and being held by Victor Cassadine (Charles Shaughnessy) there. Liesl is very resourceful but Victor may prove to be too much for her. Liesl may have to resort to some drastic measures to get away. However, Britt is likely to show up and put herself in danger as well. Who will save Britt if she gets caught? Will Britt bring herself to reach out to Jason Morgan (Steve Burton) for help? Will this reunite Jason and Britt’s relationship if he goes to her? Can Jason save Britt and Liesl?

General Hospital’s Carly may have married Jason to appease the five families. However, Sonny is home now and Carly doesn’t need to be married to Jason anymore. Sonny is a force to be reckoned with and he will get to the bottom of this takeover attempt. There is no reason for Jason to stick around when Sonny returns home. If Sonny can get past Jason and Carly’s wedding, he and Carly are likely to reunite. Jason will be free to assist Britt if needed and could probably use the distraction. Will Jason drop everything and run to Britt’s aid?

General Hospital’s Jason was forced to break up with Britt because he had to marry Carly. Now that Jason and Carly don’t need to be together, he can pick up where he left off with Britt. Jason will likely need a distraction after losing Carly to Sonny once again. Britt can provide that and so much more. Will Jason and Britt get back together if he rushes to her rescue? Can Jason get past his feelings for Carly so he can be with someone else now? Can Jason and Britt save her mother from Victor before it is too late? Who else might Jason and Britt discover while trying to save Liesl?

Jason may go to Greece to save Britt, however, it seems that the Cassadines may have several hostages and little does Jason know that his brother could be one of them. Will Jason find much more than he bargained for?