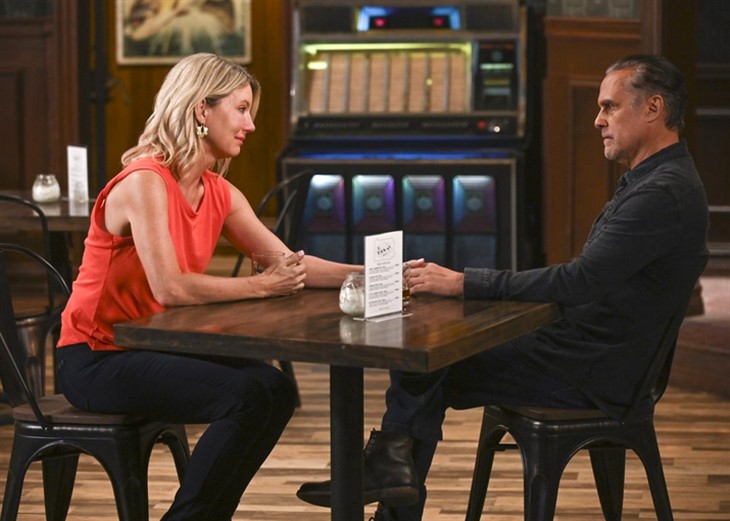 General Hospital (GH) spoilers and updates reveals there is a love triangle building on General Hospital even if those involved don’t realize it. A battle is raging inside of Sonny and he is displaying some of Mike’s personality traits. He has to determine if he loves Carly or Nina.

Sonny Corinthos(Maurice Benard) is not even aware that he is protecting Nina Reeves ((Cynthia Watros). Jason Morgan (Steve Burton) was the first to notice his lack of anger over what happened in Nixon Falls. Carly Corinthos (Laura Wright) is angry that her husband did not immediately tell her what had taken place while he had amnesia. These are red flags that no one is picking up on.

Phyllis Caulfield (Joyce Guy) saw firsthand how Mike and Nina interacted. If she sticks around Port Charles, she will notice the difference between the two personalities and will offer her opinion. She could remind Sonny of how easy-going, content and in love, he was in Nixon Falls with Nina. and this is something Carly cannot change.

Sonny loves his wife and desires to resume the life they had before he fell in the water. He also has feelings for Nina, and both Maxie Jones( Kirsten Storms) and Scott Baldwin (Kin Shriner) have suggested his. Nina is too full of guilt to even consider this possibility but Mike and Nixon Falls are a part of the mob boss and might be calling him.

Michael Corinthos (Chad ) and Carly are raging about Nina and don’t want her around her grandson Wiley Corinthos (Caleb and Kyler Ends). Spoilers suggest that Sonny might defend Nina’s right to see their grandson. Carly will be infuriated and want Nina out of their lives. Sonny will soon have to deal with his emotions for both women.

My Big Fat Fabulous Life: Whitney Reveals Status Of Her Relationship, Is She Engaged?

Days Of Our Lives Spoilers: Sami Brady Had Herself Kidnapped?