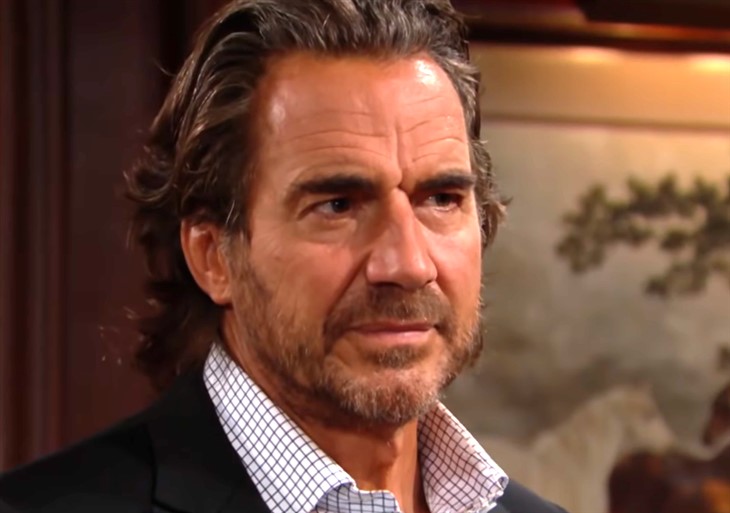 The Bold and the Beautiful spoilers and updates tease that Ridge Forrester (Thorsten Kaye) will hire Justin Barber (Aaron D. Spears) to spy on Quinn Forrester (Rena Sofer). He’s set to make a shocking discovery and he’ll update Ridge about it. The latter may decide to tell Eric about what they found out but he may end up getting surprised even more when he learns about Eric, Quinn, and Carter’s new arrangement.

Fans may recall that Justin promised that he’ll stay loyal to Ridge and the Forresters. He’ll offer his help in any way he can just so he could prove his loyalty. Ridge will give Justin a chance to prove his worth. He’ll ask him to tail Quinn because he doesn’t trust her and he wants to know what she’s up to. Ridge expects Justin to give him an update and that’s what the latter will do.

Spoilers for the week of September 27 – October 1 hint that Justin will make a shocking discovery as Quinn and Carter’s intimate relationship gets exposed. Justin will update Ridge, who will wonder how he would break this to Eric. When he finally determines a way to tell him, Ridge will be caught off guard when Eric reveals that he knows all about it.

Eric will admit that they’re in a polyamorous relationship and that it’s all his idea, which will make him feel uneasy. Eric is upset that there are certain things he can’t give to Quinn because of his erectile dysfunction. Even so, he knows there’s nothing he can do about it and he can’t blame Quinn if she turns to Carter for her special needs.

Despite what Ridge has learned about Eric’s condition, he still doesn’t approve of Quinn’s decision to sleep with Carter even if Eric knows all about it. Ridge may still want to meddle with Eric, Carter, and Quinn’s unusual arrangement even if it’s none of his business.

John “Finn” Finnegan (Tanner Novlan) will make a huge promise to Steffy Forrester (Jacqueline MacInnes Wood) that they’ll have a happy marriage and family. But Sheila is bound to cause trouble again, which will cause Finn to break the promise to his wife. Finn and Steffy’s marriage isn’t only in danger because of Sheila. Paris Buckingham (Diamond White) may also become a threat. Her feelings for her boss’ husband is growing stronger and she may decide that it’s time to move out of their home.