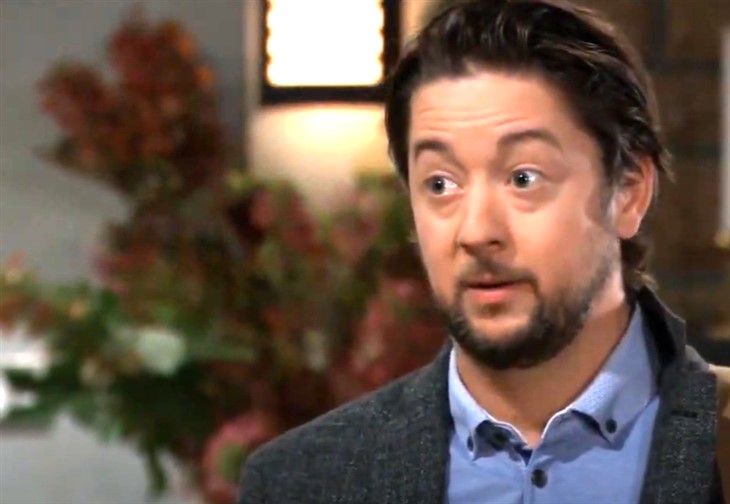 General Hospital (GH) spoilers indicate that Damian Spinelli (Bradford Anderson) has had a difficult time in recent months and it seems like things aren’t going to get any better in the near future. Carly Corinthos (Laura Wright) enlisted Spinelli to help her rescue Brando Corbin (Johnny Wactor) and his mother, Gladys Corbin (Bonnie Burroughs) from Cyrus Renault (Jeff Kober). Unfortunately, Spinelli had to be in close proximity to where Brando was being held. Spinelli was then captured himself, and would likely have been killed if not for Jason Morgan’s (Steve Burton) timely rescue.

Spinelli’s long-time love. Ellie Trout (Emily Wilson) was not happy with the turn of events. Jason lives a dangerous life, and by association, Spinelli has often found himself in danger because of their friendship. Ellie finally reached her breaking point when Spinelli was taken prisoner by Cyrus. She issued Spinelli an ultimatum, either he cut ties with Jason or she would leave him. Spinelli was unable to meet Ellie’s demands, so she left him. Spinelli is now alone and miserable although he recognizes that he and Ellie want two different things for their future. To make matters worse, the Novak family, rivals of the Corinthos organization, have tried to recruit Spinelli. But Spinelli is loyal to Jason, even though Spinelli may not feel it goes both ways.

Jason and Carly are about to be married to show a united front for the Five Families, including the Novak’s. Jason just asked Michael Corinthos (Chad Duell) to be his best man, and this will likely upset an already depressed Spinelli. He may even begin to wonder why he bothers at all, given that he has sacrificed so much. And while Jason surely meant no disrespect to his friend, Spinelli might see things differently. So much so that he might make a very costly mistake.

Spinelli is an amazing hacker / computer genius. It’s no wonder why the Novak’s were so determined to recruit him. And in his current state, it would be easy to see Spinelli makes some sort of huge mistake that will force him to work for the enemy. He may think everything is taken care of once the problem is solved, but the Novak’s won’t want to let him go so easily and may force him to keep working for them.

Will Spinelli bounce back before any harm is done? Or will Jason’s choice of a best man bring all of his insecurities to the surface. Will the Novak’s take advantage of the situation and force Spinelli to help them? Only time will tell so stay tuned to General Hospital airing weekdays on ABC. And don’t forget to check back right here regularly for all your General Hospital news, information and spoilers