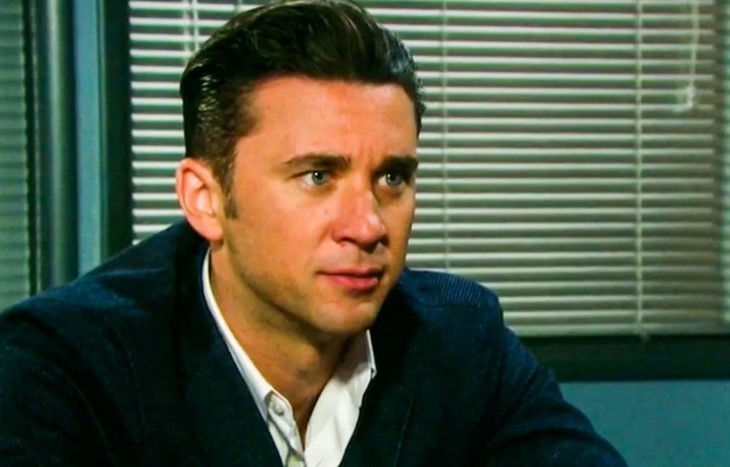 Days of Our Lives (DOOL) spoilers reveal that in Salem Johnny DiMera (Carson Boatman) wants Abigail DiMera (Marci Miller) to star in his movie. However, Johnny’s request will complicate Abigail and Chad DiMera’s (Billy Flynn) attempt to fix their marriage. There is one thing that would enrage Chad and that’s a reminder of Abigail and Stefan DiMera’s (Brandon Barash) affair.

DOOL spoilers reveal that Chad struggles to convince Abigail to come home. Eventually, Abigail agrees and the couple makes plans to fix their marriage. The fall preview in Soap Opera Digest confirms that Johnny has a request for Abigail. The aspiring movie-maker envisions Abigail in the starring role of the film he’s making.

While Johnny tries to get casting and investors gathered for his movie, Chad and Abigail will be working on their relationship. Before Chad’s one-night stand with Gwen Rizczech (Emily O’Brien), the couple went to a marriage counseling session. At that time, fans discovered Chad still isn’t over Abigail and Stefan’s affair.

Chad knows that Abigail was not herself and it was an alter personality that slept with Stefan. Despite knowing this, Chad still can’t get past what happened. Jake DiMera (Brandon Barash) is Stefan’s twin brother, but their appearance is the only thing they share. Jake is completely different from his dead twin. That doesn’t make it any easier for Chad, especially since Jake and Abigail became friends.

Days Of Our Lives Spoilers – ‘Chabby’ Reconciliation At Risk

Days of Our Lives spoilers reveal that Johnny asking Abigail to star in his movie will put “Chabby” at risk. Executive producer Ken Corday didn’t explain why when speaking with Soap Opera Digest. Corday just stated that it would further complicate Chad and Abigail’s reconciliation attempt.

“It’s important to reset this couple. They’re a very popular couple. The viewers want more Abby and Chad, so we’re going to give them that. Chad convinces Abby to come home, but their marital problems are far from over. This all becomes more complicated when Johnny asks Abby to star in his movie.”

What about a movie could possibly affect Chad and Abigail’s relationship? Considering Chad still has flashbacks of Abigail and Stefan’s affair, plus Jake looking just like his twin brother, could this be it? Is it possible that Johnny also casts Jake, who shares a love scene with Abigail? If so, then it would make perfect sense why the movie role could complicate Chad and Abigail’s reconciliation. Chad will probably explode and might even give Abigail an ultimatum.

Do you have any theories on why Johnny asking Abigail to star in his movie would jeopardize “Chabby?” We will have to keep watching the NBC soap to find out what happens with this storyline.

Chrisley Knows Best: Nanny Faye Celebrates Her Birthday, How Old Is She?