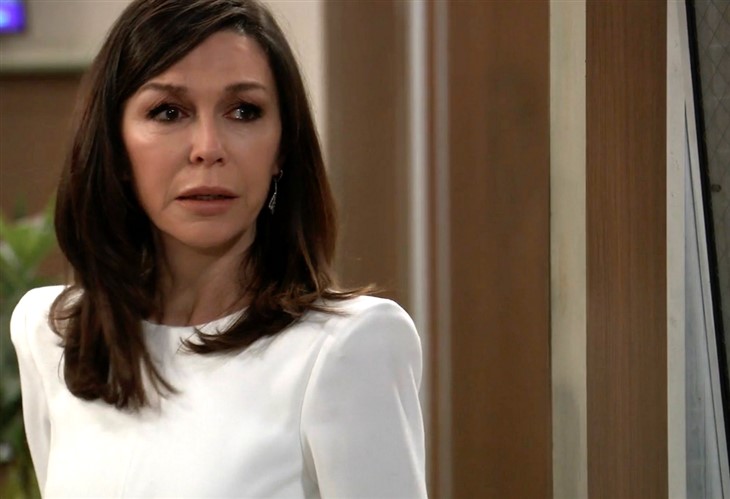 General Hospital spoilers indicate that Anna Devane (Finola Hughes) will get closer to capturing Peter August (Wes Ramsey). Anna has just learned that Victor Cassadine (Charles Shaughnessy) is alive and backing Peter. Anna and Robert Scorpio (Tristen Rogers) will move ahead with their plans to save everyone being held captive on Cassadine Island. However, someone will be left behind, who will it be?

General Hospital’s Drew Cain (Cameron Mathison) is now a threat to everyone that Peter wants to be taken out. Peter is controlling Drew’s every move. Anna is determined to save Drew who is the most innocent in this whole situation. Anna will likely promise Sam McCall (Kelly Monaco) to save her ex-husband for her daughter’s sake. Can Anna keep that promise? Is there any way to break through Drew’s conditioning once again? Will Drew be left behind to fend for himself?

General Hospital rumors suggest that Valentin Cassadine (James Patrick Stuart) may end up fighting for Could Valentin risk his life to save Anna and be the person left behind in the end. Will Victor save Valentin and get him the medical assistance he needs after the compound is invaded?

General Hospital Spoilers – Liesl Obrecht Could Be A Casualty

General Hospital’s Liesl Obrecht (Kathleen Gati) could be left behind as well. Victor would not hurt Liesl no matter what she does. Victor has proven that by not killing Liesl already. Anna and Liesl have finally managed to move past their issues and have begun a budding friendship. Will Anna have to leave Liesl behind and at Victor’s mercy?

General Hospital’s Robert has been Anna’s partner in love and spying for years. Anna would not willingly abandon Robert in any situation. However, Anna may be forced to leave Robert behind to save everyone else involved. Now, Sam McCall (Kelly Monaco) and Dante Falconeri (Dominic Zamprogna) have joined the mix in Greece as well. Anna may have to save the civilians no matter what happens to Robert. Robert could also get a lead on the truth about Holly Sutton (Emma Samms) as well. Will Robert stay behind to find Holly?

General Hospital Spoilers – Peter August Could Get Away

General Hospital spoilers indicate that Peter isn’t likely to die no matter what happens. Could Anna be forced to turn public enemy number one loose to save everyone else? Will it come down to bring Peter in or lose someone Anna truly cares about?

Peter is likely to be the one left behind so that he can cause more havoc another day. Will Anna be forced to allow him to escape once again?