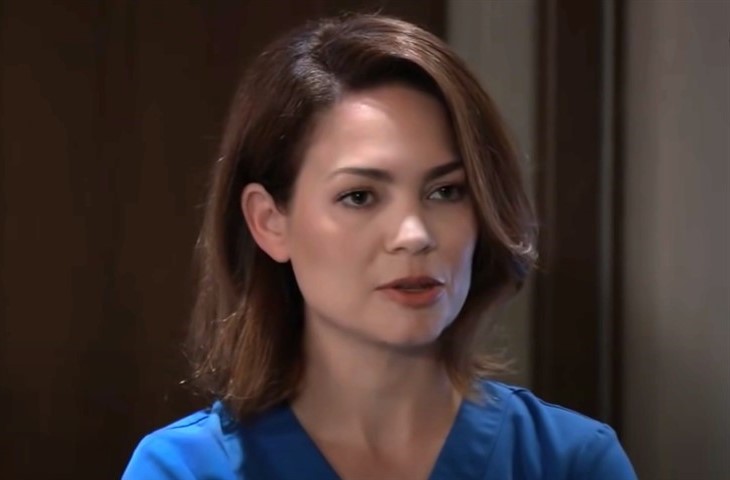 General Hospital (GH) spoilers tease that Elizabeth Baldwin (Rebecca Herbst) may have noticed Dr. Austin’s (Roger Howarth) resemblance to her late husband, Franco Baldwin (Roger Howarth) even though she didn’t say so. Will anyone else think that Austin looks like Franco?

General Hospital viewers will remember that when Austin showed up just in time to deliver Louise August (twins Capri and Teddy) Maxie Jones (Kirsten Storms) as she was in labor in the woods she didn’t notice any resemblance. However, Maxie was very distracted – she was in the throes of labor and running from a psycho nurse dispatched by a psycho baby daddy, however. General Hospital viewers will recall that she did give him a strange look – but then, he did look a little strange! Does the guy think he’s immune to ticks, or is he working on a toxin himself that will make human blood lethal to insects?!

No doubt the seemingly kind Dr. Austin did arrive just in time to render aid, but he was dressed a little strange to be hiking in deep forest, where there are not only ticks, mosquitos, and other nasty things, but also likely snakes! Even the best DEET-based insect repellant won’t repel snakes, poison ivy, poison oak, or poison sumac! We can certainly give Maxie a pass for not seeing any resemblance to Franco in Austin. Besides, cray-cray fake nurse Chloe Jennings (Kimberly J. Brown) had given her a sedative before kidnapping Maxie, and she could have thought Austin looking like Franco was a side effect to the sedative if she did notice! Either way, when Brook Lynn Quartermaine (Amanda Setton) arrived she didn’t say anything about Austin looking like Franco either, but she was trying to take Louise to safety!

GH Spoilers And Rumors – Austin Is Brought To General Hospital

General Hospital viewers will remember that Austin came into General Hospital right behind Maxie. Maxie didn’t know anything about the Pautuck area and probably demanded that Austin be brought there since she wanted to be brought there. However, Elizabeth is the one who was called into service to attend to Austin, who Maxie told was in and out of consciousness. Elizabeth looked him straight in the eye and seemed taken aback, although she quickly recovered. It is of course possible she was concerned seeing his eye movements when he opened his eyes – cray-cray Chloe had clobbered him over the head with a fireplace poker, and he had been out cold for a while! General Hospital viewers know Elizabeth has dealt with head injuries before and how movements of the eyes can denote certain neurological symptoms.

Perhaps it was a concern for her patient, but perhaps he reminded her of Franco! According to the summer previews provided by General Hospital showrunners, Austin has an interest in a prominent family in Port Charles – and will shake up the town all summer long! The reason he might shake up the town is because of his strong resemblance to the late Franco Baldwin! The most prominent families in Port Charles are the Quartermaines, the Cassadines, and possibly the Corinthos family would also be considered prominent.

If Austin’s interest is in the Quartermaine family, that also would provide a link to Franco because Franco once believed that he was a Quartermaine and that Jason Morgan (Steve Burton) was his brother. That is because his foster brother “Andy” was Drew Cain (Billy Miller). Whether Austin turns out to be yet another long-lost twin remains to be seen – but it would surprise no one if Heather Webber (Robin Mattsson) gave up or sold a twin as well when she gave birth to Franco, after all, she gave him away and Betsy Frank (Deborah Strang) may only have agreed to take Bobby! Don’t be surprised if Elizabeth and others in Port Charles start voicing their opinions over Austin’s resemblance to Franco – if no one else will, we can be pretty sure Scott Baldwin (Kin Shriner) might ask some questions!