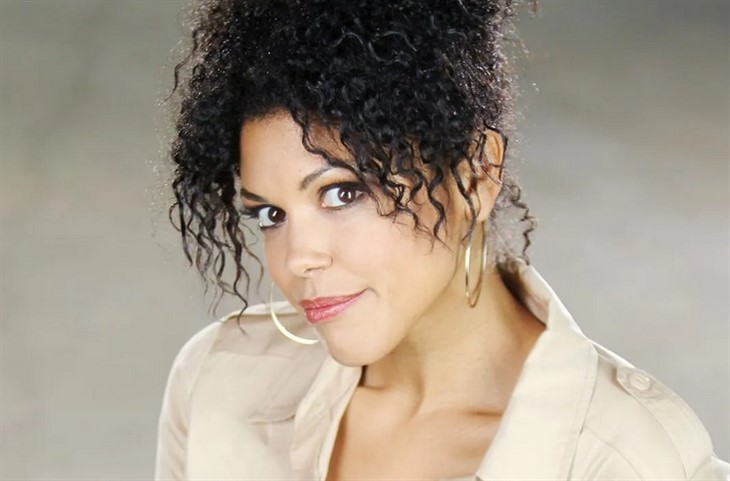 General Hospital spoilers and rumors tease that Jordan Ashford will return with a new face before the end of November, and it will be the face of Karla Mosely! General Hospital viewers who also watch the CBS soaps The Bold and The Beautiful or The Young and The Restless will recall Karla from her role as Maya Avant on The Bold and The Beautiful, and most recently covering for Mishael Morgan as Amanda Sinclair on The Young and The Restless.

General Hospital viewers will recall that Briana Nicole Henry left the role of Jordan Ashford when her character’s kidney was compromised. Jordan had been trapped in a gas-filled basement with Dr. Portia Robinson (Brook Kerr) when Portia and Curtis Ashford (Donnell Turner) had been following a lead on the murdered Naomi Dreyfus (Gigi Bermingham).

Jordan had been investigating at the same house where Curtis and Portia showed up, intending to question a former employee of the Crichton-Clark Clinic who Phyllis Caulfield (Joyce Guy) had once known. The man was found murdered in his basement, and Curtis chased the murderer down not knowing that he’d locked the two women in the basement with the body. There was a gas leak, and even though Portia tried to stop it, it was enough to render Jordan unconscious, and she kept her going until Curtis returned and got them out. As General Hospital viewers saw when Jordan was brought in to General Hospital and evaluated, her kidney was compromised.

General Hospital viewers will recall that once she was brought back to General Hospital, Dr. Austin Gatlin-Holt (Roger Howarth) who had been manning the emergency room that evening called all of Jordan’s family and friends together. He announced that her kidney function was down and arranged for a transfer to a specialty renal clinic in Albany, New York. Jordan left the Port Charles Police Department to Mac Scorpio (John J. York) to oversee. While there have not been any hints so far in any General Hospital storylines of Jordan’s impending return or any formal announcement of the character’s role being taken over by Karla Mosely, daytime drama fans familiar with Ms. Mosely would agree she would make a beautiful Jordan Ashford! If she is to appear by the end of November as the rumor states she will, she would be starting to film at General Hospital any day now and a formal announcement would be forthcoming soon.

General Hospital fans who are not familiar with Karla Mosely should know that The Bold And The Beautiful and The Young and The Restless aren’t the only daytime dramas she has appeared in. Her first series regular part was on the long-running soap-opera Guiding Light. There, she played Christina Moore Boudreau from 2008 until the show’s cancellation in 2009. Afterwards, Mosley and her co-star Lawrence Saint-Victor (now The Bold and The Beautiful’s Carter Walton) created the web series “Wed Locked” where they also starred in.

This wasn’t their last collaboration; in 2013 Mosley and Saint-Victor both joined the daytime drama The Bold and the Beautiful . Initially they were intended as lovers on this show – later spinning-off a limited-run web-series called “Room 8” which they again wrote and starred in. Mosley’s Bold and Beautiful character of Maya Avant, a transgender role soon shot to front burner status. The first step was a romance with Jacob Young’s Rick Forrester – who also played Lucky Spencer on General Hospital for a period of time. The reveal that Maya was transgender was groundbreaking for daytime dramas and television in general at that time.