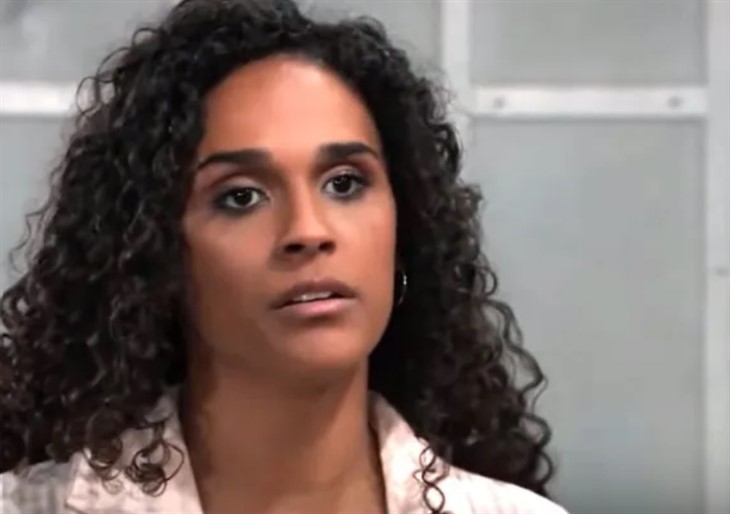 General Hospital spoilers indicate that Jordan Ashford (Briana Nicole Henry) may end up pregnant after she and Curtis Ashford (Donell Turner) try to make their marriage work. However, Curtis may realize that he would rather be with Portia Robinson (Brook Kerr). Will Jordan find out after she and Curtis split again that she’s pregnant with his baby?

General Hospital’s Briana posted a photo on her Instagram story that has caused fans to jump to the conclusion that she could be pregnant. Briana and her husband, Kris Bowers, June 6, 2020. Recently Briana posted an image that reads, “when my daughter is in my belly I will speak to her like she’s already changed the world she will walk out of me on a red carpet fully equipped with the knowledge that she’s capable of anything she sets her mind to” -rupi kaur This post has fans wondering if Briana is pregnant and this is her way of dropping a huge hint to fans. Of course, these rumors run rampant whenever a soap actress looks like she has gained a pound as well. However, if this is the case, will General Hospital writers write the baby into the script?

If General Hospital’s Briana is pregnant, it would be added drama. Stella Henry (Vernee Watson) had stolen Jordan’s divorce papers and they were ruined when she had her stroke. Jordan has suggested to Curtis that they try to make their marriage work. However, Curtis is already in a relationship with Portia who he dated years ago. Curtis broke up with Portia because he realized she was married. However, now that both of them are considered single, Curtis wants to try again. However, Curtis has no idea that the divorce papers have not been filed. Will Curtis give up Portia to try again with Jordan?

General Hospital Spoilers – Another Break Up With Jordan Ashford?

General Hospital’s Curtis doesn’t feel like he can trust his wife and hasn’t for some time. Jordan has continually kept secrets from Curtis that he cannot get past. Will giving his marriage another shot make a difference? Jordan has already admitted that she can’t tell Curtis everything. Is Curtis better off with Portia? Will Curtis learn that Portia had his child years ago?

Suppose Jordan and Curtis separate and then she finds out she’s pregnant. Will the baby be another thing that keeps Curtis and Portia apart? Will Curtis go back to Jordan if she’s carrying his child? Will the writers even write the baby in if Briana is pregnant? Only time will tell if Briana is pregnant until then we can only speculate on this fictional child.

The Bold And The Beautiful Spoilers: Eric Offers Sheila Another Chance? – Quinn Protective Of Ex-Husband