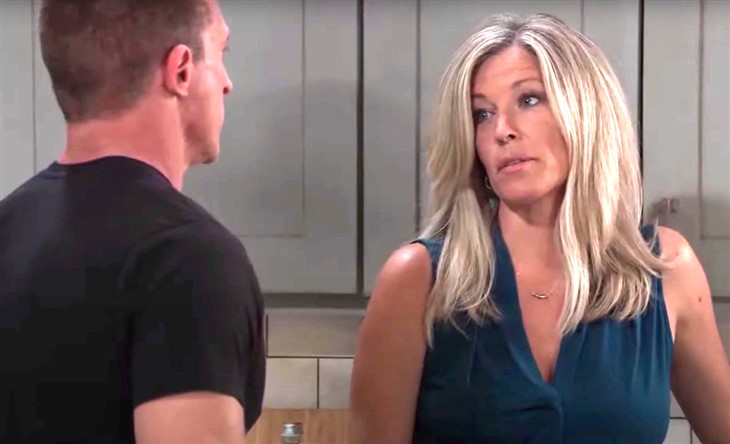 General Hospital spoilers reveal Jason and Carly getting ready to marry for real this week. It’s not going to be a marriage of convenience after all — if the wedding even takes place.

Carly (Laura Wright) is determined not to let anything get in the way of finally marrying Jason (Steve Burton) after three decades of longing for just that. The mob threat? Meh. She knows Jason won’t let anything happen and he has Brick (Stephen A. Smith) and Spinelli (Bradford Anderson) on security making sure it will all be ok. Sonny? She has made peace with this ‘death’ — although she does tell Josslyn she thinks about him all the time.

But Carly has no idea what’s coming and no idea that the Five Families are planning something and Sonny (Maurice Benard) is actually alive — and Jax knows it. Also, so does Peter.

GH Spoilers – Is Everything About To Go Wrong?

As Carly prepares to walk down the aisle, Nina (Cynthia Watros) is in Nixon Falls feeling the walls closing in as Peter (Wes Ramey) threatens her life, Jax threatens to tell Sonny who he is, and Sonny wants to just be with Nina and continue to call himself Mike with no thought of his former life.

This makes Laura Wright wish the fans had a little more patience because she promises us there will be quite the payoff in the end.

“This is what you’re waiting for,” Wright said in the September 21 issue of Soap Opera Digest. “Even the people who have complained about the storyline or the people who have been frustrated — ‘Oh My God, Sonny, Sonny, Sonny’ — this is what you’ve been waiting for. Every long soap storyline has its climax and it has the huge explosive ending. This is it. You’re going to be so surprised. You think you know what’s going to happen, but you don’t.”

Well, then, that sure does sound intriguing. It’s nice to be surprised because soaps don’t often offer us that element of shock anymore. So, stay tuned to General Hospital weekdays to see if you really will be surprised. We sure hope so. (And does that mean Peter gets to die for real this time?)