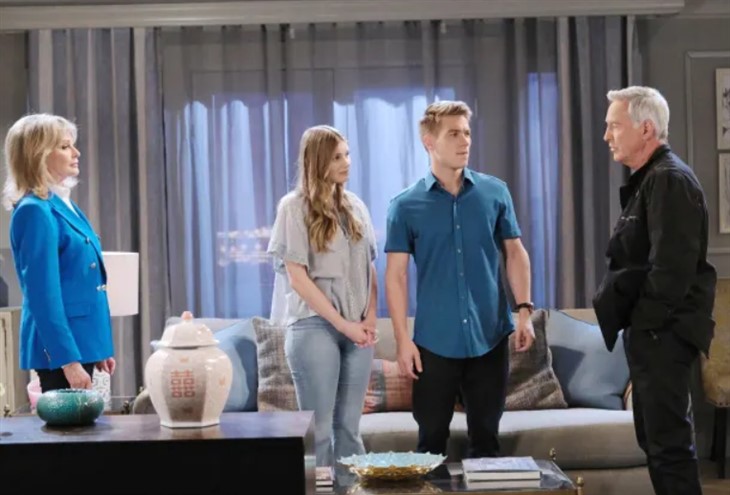 Days of Our Lives spoilers reveal that Johnny DiMera (Carson Boatman) knows how to use family scandals to his advantage. Johnny is already in hot water with EJ DiMera (Dan Feuerrigel), John Black (Drake Hogestyn) and Marlena Evans (Deidre Hall). Johnny has something important to tell his twin sister, which might be her rape being included in the movie.

DOOL spoilers reveal that Johnny and EJ are each struggling to get their way. EJ demands that his son forget about a career in filmmaking and work at DiMera Enterprises. However, Johnny has no interest in working at the family business and thinks he should be allowed to pursue his own passions.

This is escalating from a father/son disagreement to a full-on war. Johnny is just as stubborn as EJ and Sami DiMera (Alison Sweeney) combined. He’s not giving up and is determined to prove his father wrong. Unfortunately, that means guaranteeing that his first movie is a success. This leads to Johnny doing some shameful things to his own family.

In the weekly preview, Marlena tells John about Johnny’s movie, which is supposed to be centered on Sami’s life. One storyline is going to be about John and Marlena’s affair. As fans recall, Sami was the one that discovered “Jarlena” together. Even though Sami is grown with children and a grandchild, she still has anger about her mother’s betrayal.

It is also suggested that Marlena’s demonic possession and serial killer storyline might also be used in Johnny’s movie.

There is also Johnny hurting his father and punishing him through the movie. EJ tells Johnny that his movie is wrong, that Lucas Horton (Bryan Dattilo) isn’t the love of Sami’s life. When he insists he is Sami’s true love, Johnny bluntly replies, “not in my movie you’re not!” EJ is clearly hurt and it was likely intentional on Johnny’s part.

Days Of Our Lives Spoilers – No Shame, No Empathy And Entitlement

Days of Our Lives spoilers reveal that Johnny will do anything to make sure he doesn’t fail. The last thing he wants is to crawl back to his father, take the job at DiMera Enterprises and admit EJ was right all along. However, he’s having a hard time getting investors and money is a huge issue.

Not only does Johnny sell his family members down the river, but he attempts to sweet-talk Marlena into investing in his movie. That’s right, he’s asking his grandmother for money when he is trying to make a buck off of Marlena’s bad memories. That isn’t the worst of it, though.

It is confirmed in Soap Opera Digest that Johnny has something important to tell Allie. Although he does offer her the chance to play Sami in the movie, that’s not the important part of the conversation. There is reason to believe that Johnny would actually use his twin sister’s rape in the movie.

He might include all the elements that make it an allegedly “good” story. Allie wasn’t just raped and got pregnant, but she falsely identified a suspect… who she is now sleeping with. The real rapist just happened to be Tripp’s secret half-brother and was also responsible for drugging his own mother so nobody would believe her. She also tried to shoot off Tripp Johnson’s (Lucas Adam) family jewels and Charlie Dale (Mike Manning) ended up dead. As fans know, Sami was arrested for the crime, so it would “fit” in with the movie about Sami’s life.

However, Johnny never bothered to get Allie’s consent before airing her personal business to the entire world. Just like he doesn’t bother asking for permission before airing his own family’s secrets, scams and scandals. Unless he does a fast 180, he won’t have any family left.