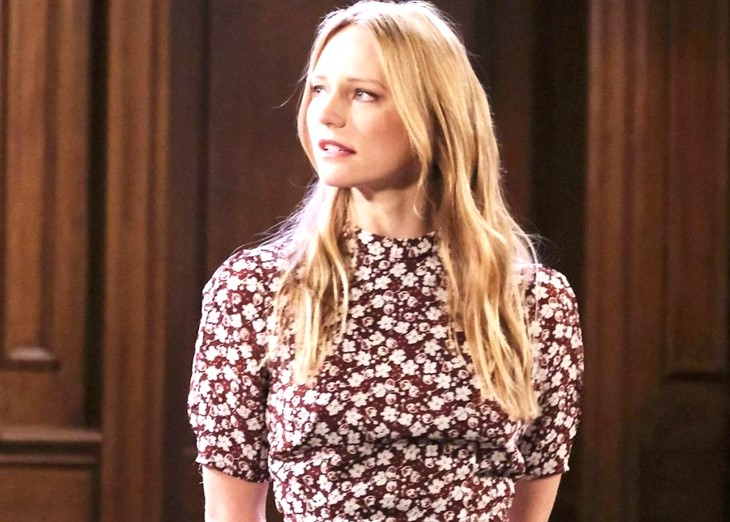 Days of Our Lives comings and goings reveal Marci Miller returning to Salem as Abigail DiMera this week as Miller returns from her maternity leave.

Days Of Our Lives Spoilers – A Second Chance With Chad DiMera

While Chad DiMera (Billy Flynn) manages to say the right things to get Abigail to return to Salem, she’s not 100 percent happy about coming home. Chad hurt her a lot several times over when he refused to trust her, had an affair with Gwen, and then refused to trust her again. That’s a lot to take and she stayed away for a reason. But now Chad gives her all the reasons he needs her to come home so she agrees.

Abigail used the excuse of helping Jennifer (Melissa Reeves) settle Laura’s (Jaime Lynn Bauer) estate in Boston to get away from Chad — and Jack as well, considering that Jack was so accepting of this new sister who she hates so much.

And all of that was an excuse for the show to write Marci Miller off the canvas so she could enjoy maternity leave after giving birth to daughter, Willet.

Marci Miller was nearly ready to give birth when it was finally revealed that she was pregnant and would be off the show for a while. However, eagle-eyed viewers could tell she was trying to hide a pregnancy as Abby started wearing a lot of big dresses and big coats. Miller kept the pregnancy a secret on purpose as she thinks some things in a person’s life don’t need to be for the public eye.

“So much of our life can be public and we get to choose what parts of it we want to share and why and why not, and I don’t know, it just felt nice to just have something for ourselves for once,” she said in the September 21 issue of Soap Opera Digest.

Some fans did find her baby registry, which can be a little disconcerting, but Miller is thrilled with her new little girl who she feels honored to get the chance to raise.

What will happen to Abby now that she’s back in Salem? Stay tuned to Days of Our Lives weekdays to find out.