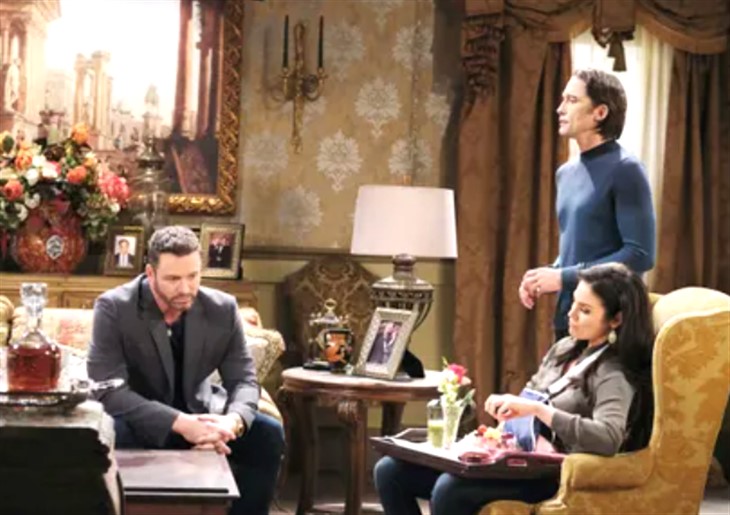 Days of Our Lives (DOOL) spoilers reveal that in Salem Philip Kiriakis (Jay Kenneth Johnson) shows up in Pennsylvania. Brady Black (Eric Martsolf) and Chloe Lane (Nadia Bjorlin) are forced to share a hotel room when their plane to New York is grounded. Philip “catches” them together and explodes in a jealous rage, which could send Chloe right into Brady’s arms.

DOOL spoilers reveal that Brady insisted that Chloe go with him to meet a client in New York. However, Chloe already predicted that Philip wouldn’t like it. Brady tried to convince her by saying she could see her family and her son. Chloe asked a lot of questions but eventually agreed to go. In the new issue of Soap Opera Digest, Martsolf teased that Brady’s intentions are not completely “golden.”

“Brady is trying to resurrect the feelings he once had with Chloe. I think he’s into it. He’s just stuck with wanting to respect her wishes about wanting to move forward with Philip, but he firmly believes that she and Philip are not a good match. Brady truly believes that he would be a better man for her than Philip would… I don’t think that Brady’s intentions are completely golden.”

While Chloe does have feelings for Brady, she has no intention of betraying Philip. Chloe really wants Philip to trust her but he doesn’t. He is paranoid that something is going to happen between Brady and Chloe, especially when they get stuck in Pennsylvania. Convinced that Brady and Chloe are sleeping together, Philip heads to Pennsylvania to check on the situation himself.

Days of Our Lives spoilers reveal that when Philip arrives at the hotel Brady and Chloe are staying at, he goes straight to their hotel room. When Philip walks in, he finds Brady and Chloe in bed together. Even though they are not actually doing anything and there is a very good reason for this, Philip just sees red. He explodes and accuses Chloe of betraying him with Brady, just like he was afraid of.

In a sneak peek photo, we see Brady and Philip facing each other and both men are furious with each other. Meanwhile, Chloe is sitting on the bed and appears to be trying to desperately explain.

It is confirmed that after Chloe returns from the business trip, things are not the same in her relationship. Philip’s actions and false accusations, as well as actually following her to Pennslyvlinai, create major issues. Philip will probably try to smooth things over, but he went way too far. All he did was actually push Chloe toward Brady.

90 Day Fiancé: Julia Trubkina Claps Back At Critics In Video, Says She’s Not The ‘Villain’