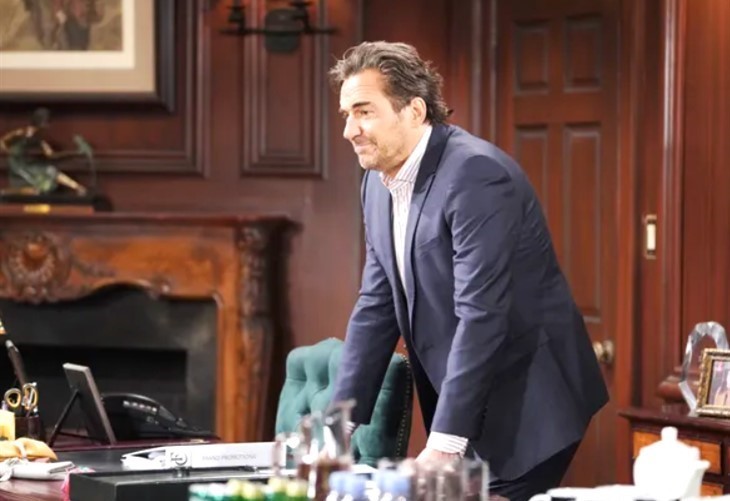 The Bold and the Beautiful spoilers document that Ridge Forrester (Thorsten Kaye) responded to Carter Walton’s (Lawrence Saint-Victor) news exactly as Brooke Logan Forrester (Katherine Kelly Lang) did. They were mutually apoplectic in learning that Queric is still together.

Carter’s tell about Eric Forrester (John McCook) calling off the divorce was followed by something intriguing. When asked by Bridge what he thought of the unexpected reconciliation, Carter praised Eric and Quinn Fuller Forrester (Rena Sofer) and offered his support for the development.

Brooke chose to focus on Carter’s words about Quinn, with Ridge looking quizzically from behind her.

The Bold And The Beautiful Spoilers – Bridge Acts With Protective Intent

It could be off-putting to see Brooke and Ridge’s negative response to what seems like upbeat news, if someone didn’t know the full or even recent history of the characters. One could also ask why Brooke and Ridge believe they should have a strong say in what happens?

However, hardcore fans know that Bridge is merely looking out for Eric, who has been betrayed by Quinn several times during this marriage. Ridge knows that full well because he engaged in flirtations with her that included a beach setting kiss.

Brooke is Eric’s ex-wife and the mother of two of his children, which gives her permanent, protection rights in her mind.

Carter learned that Eric didn’t want to divorce Quinn through a phone call. Quinn was present in Carter’s apartment when that message was received. It was a heart-breaking scene for Quarter at the time.

Quinn and Carter fell in love with each other, with both people directly expressing their shared feelings. This connection was never planned and there was no ill intent toward Eric as the link developed.

Saint-Victor’s character didn’t know what Eric was telling Quinn in competing scenes. So, like the woman he’s in love with, his guilt level will surely deepen when he learns the truth.

It was obvious that Quinn felt full compassion for Eric, when he was telling her about the physical condition that he’s developed. Her response was heartfelt, as she told him that they will face the problem as a couple.

This very personal situation could bring Queric back together in a way that couldn’t have been imagined before Eric revealed his health condition. As to what Quinn tells Carter is another part of this increasingly compelling storyline.