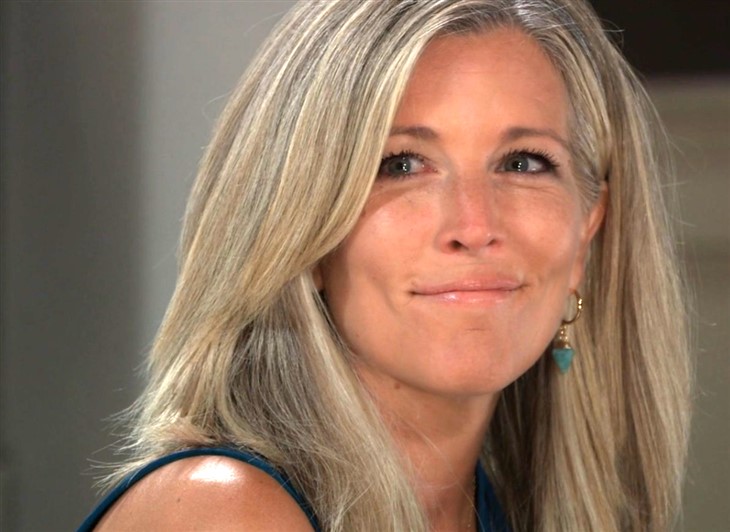 General Hospital (GH) spoilers for Friday, August 13, 2021, reveal Carly having a long talk with someone who’s not even really there. Instead, he is on the Pennsylvania side of the river. She just doesn’t know that yet.

Carly (Laura Wright) was actually thrilled when Donna started calling Jason (Steve Burton) “Daddy” but Jason wanted her to put a stop to that immediately. He is not the little girl’s father. Sonny (Maurice Benard) is and she should know that.

Once alone in the house with Joss (Eden McCoy) at the party at Wyndemere and Jason elsewhere, Carly has time to think about what she is doing. Should she really marry Jason, even though she claims the marriage would just be a front for the Five Families? Is she abandoning his memory so soon. She asks this of Sonny’s imaginary spirit because Sonny is actually still alive. That doesn’t stop Carly from imagining him telling her that marrying Jason is just what he wants.

Meanwhile, the real Sonny is in an empty bar in Nixon Falls with Nina (Cynthia Watros) calling himself Mike and dressing like Julian (William deVry). He thinks he has a future with Nina and wants to make big plans with her. Nina gets caught up in the moment and thinks this future can actually happen.

GH Spoilers – The Teens Get Ready To Party

Then there’s the aforementioned party at Wyndemere that’s bound to be lit when Nikolas brings the truth about Spencer to the forefront. But first Spencer (Nicholas Chavez) must get the place ready and does so with Cameron (Will Lipton). The two never got along when they were younger, but can they manage to be friends now? And will they even give one another dating advice before Spencer’s father ruins everything?

Dante (Dominic Zamprogna) shares some police information with Sam (Kelly Monaco) and we bet it’s a lead on who might have murdered Hayden’s (Rebecca Budig) mother. Dante also tells Sam he wants to spend some quality time with her and it looks like they do so at the Metro Court pool. It also looks like Sam is about to get a very interesting phone call….

Elsewhere, Shawn (Sean Blakemore) also wants to know who killed Hayden’s mom, but Jordan (Briana Nicole Henry) wants him to leave things to the police. Does he know she can rarely ever solve a case? Will he let her be? Stay tuned to General Hospital weekdays to see how these stories play out.

B&B Spoilers: Will Finn And Steffy’s Marriage End Before It Begins?