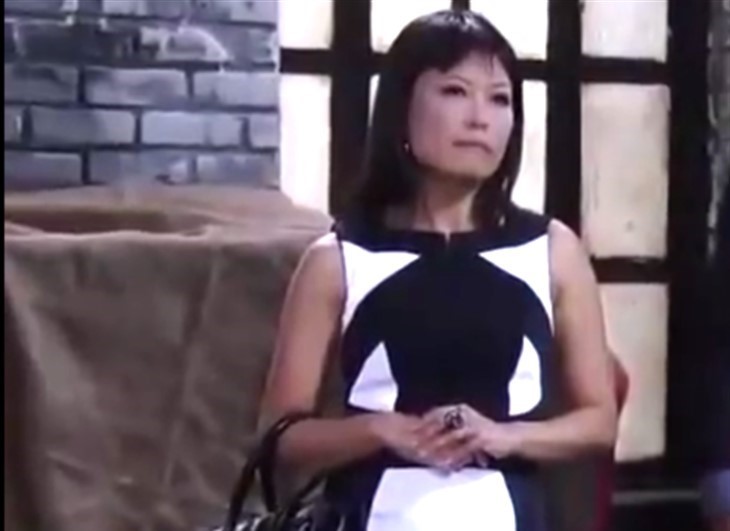 General Hospital spoilers and rumors tease that Nina Wu (Lydia Lock) recently told Sonny Corinthos (Maurice Benard) that Brad Cooper (Parry Shen) is her nephew given up for adoption, she may have not told Sonny the whole story or the real story about Brad’s past at all. General Hospital viewers can easily see that Brad is just not cut out for the mob!

Longtime General Hospital viewers will recall that the original Wu family consisted of Chaing Wu, (Aki Aleong) Kim Wu also known as Kim Soong (Steven Leigh) and his sister, Jade Soong Chung also known as Jade Wu (Tia Carrere). No mention was made at that time of Nina Wu, who apparently is another sister of Kim and Jade. Chaing was their grandfather.

The original story when Brad first came on General Hospital was that his biological mother died in childbirth and his father, Kim as well as Chaing were already dead by the time that he went on a search for his biological family. However, Brad was bullied as a kid because he was held in disdain by his peers as a gay, fat, Asian tap dancer.

Brad, however, was a very good tap dancer as a kid. However, he is weak minded, timid, and a coward, as evidenced by how easily he allowed Nelle Benson (Chloe Lanier) bully and manipulate him into swapping babies and keeping the secret of Wiley Corinthos’ (Kyler and Caleb Ends) survival for over a year. He was also terrified of going back to Pentonville Prison after having been treated at General Hospital after he was stabbed by a minion of Cyrus Renault (Jeff Kober). He had begged Britt Westbourne (Kelly Thiebaud) not to let him be sent back!

GH Spoilers And Rumors – Brad Cooper Is Coming Up For Parole, And Nina Wu Went To Sonny Corinthos For Help

General Hospital viewers will recall from a recent episode of General Hospital, that Nina Wu asked to meet with Sonny. She revealed to Sonny that Brad is her nephew and Kim was her brother. She asked for Sonny’s help – or actually, his cooperation. She didn’t expect forgiveness from Sonny and his family, considering Brad’s extreme lies, but she did ask that Sonny would not retaliate against Brad in any way and asked that his family wouldn’t either.

However, since Nina Wu is a previously unknown member of the Wu family, fans have to wonder if Brad’s adoption story is true – or if he could have been adopted at an older age but not old enough to remember his family of origin. It just doesn’t seem like Brad, even as a small child, would have had what it took to be a member of a mob family. If Brad was timid and fearful and prone to bullying as a young teen, that was probably his nature and his personality even as a toddler!

For being the head of a mob family, Nina Wu does seem to have some compassion! She really did the Corinthos family a solid when she made sure that Jason Morgan (Steve Burton) and Carly Corinthos’ (Laura Wright) wedding limo wasn’t blown up, with Sonny finally making it back home with his memories intact on their wedding night! Nina seems to like Sonny and Carly and the feeling appears to be mutual.

General Hospital viewers have to wonder though, if maybe Nina is the baby of the Wu family and possibly is really Brad’s birth mother, rather than Kim and an unknown woman being his birth parents. Although Nina and Brad’s ages have never been revealed, it is possible that Nina possibly became pregnant with Brad at a young age, possibly as a single mother.

True, aunts and nephews can have great love for one another, but few aunts who didn’t raise their nephews would stick their necks out for them like Nina is for Brad. Mob families can be very fierce, and someone who didn’t make the grade could be killed – it could be that Nina could see that Brad wasn’t cut out for the mob as a toddler and gave him up for adoption himself, probably living far away from the rest of her relatives when she became pregnant. Kim and Jade may in fact have never known about Nina’s pregnancy nor of Brad – and when it became apparent that she would have to take over as head of the Wu crime family, she may have given Brad away for his own protection!