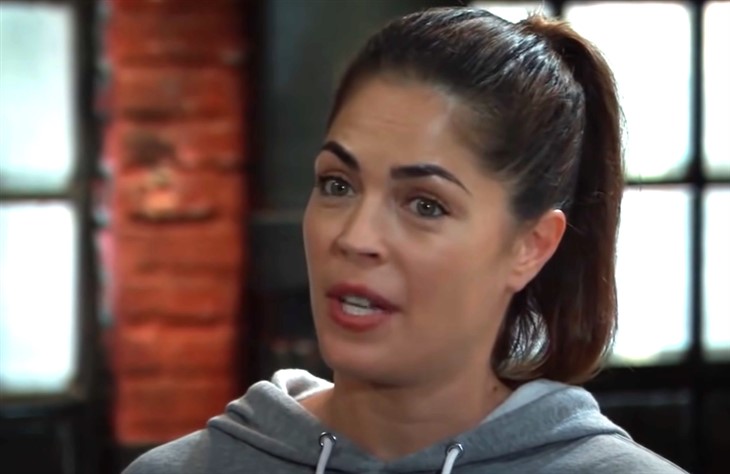 General Hospital spoilers and rumors tease that Britt Westbourne (Kelly Thiebaud) will struggle with her grief, not only for asking Jason Morgan’s (Steve Burton) help to rescue her mother, but because she never admitted to him that she still loved him in upcoming episodes of General Hospital!

General Hospital viewers will remember that Britt had hesitated to take Jason’s offer of help when her mother, Liesl Obrecht (Kathleen Gati) first went missing. Britt was still angry at Jason after he so suddenly dumped her in order to marry Carly Corinthos (Laura Wright), and who could blame her? He arrived at her suite supposedly for their date and instead he broke up with her! It was out of the blue – but Jason, of course, didn’t discuss “the business” with Britt and this was for “the business”.

Jason and Carly married in order to present a united front to the rest of the Five Families, and in the mob, Jason would have either had to marry Carly or kill her, so he didn’t really have much of a choice there! General Hospital viewers know that Britt was still mad at Jason when she finally accepted his help, and they immediately took off to Cassadine Island to search for Liesl. But in all the time they were together on the trip up until the tunnel collapse which was presumed to have taken his life, Britt had never told Jason she still loved him, even though it was obvious to both Liesl and Drew Cain, (Cameron Mathison) who literally held her back from rushing to Jason as the tunnel collapsed onto him!

General Hospital viewers can see that Britt blames herself for Jason’s presumed death – after all, if she hadn’t have accepted his offer of help to find Liesl, he never would have been on Cassadine Island! But then, Drew would have never been found either, and he may never have been set free from his programming! It was Britt pickpocketing Peter August (Wes Ramsey) that got the chariot tarot card, which was used to deactivate Drew’s programming, plus Jason paid attention and remembered that Peter used it with the command “stand down”!

When Sam McCall (Kelly Monaco) and Dante Falconeri (Dominic Zamprogna) and Anna Devane (Finola Hughes) and Valentin Cassadine (James Patrick Stuart) had come before to Crete, they had given up on Drew after he was shot and fell into the waters below a high bridge; they’d assumed him dead! General Hospital viewers know that if Jason and Britt hadn’t come to Cassadine Island looking for Liesl after Anna and Robert Scorpio (Tristan Rogers) took in Victor Cassadine (Charles Shaughnessy), and Anna and Valentin got the location from the injured guard, Drew and Liesl may never have been rescued!

General Hospital viewers will recall that anyone could tell Britt and Jason were falling in love when they were on the run together in Canada, even though he never told Britt he loved her either. It would have been difficult to do so in the situation he found himself in after they returned to Port Charles, and when on Cassadine Island they were too occupied in trying to effect a rescue when they weren’t running from Peter!

General Hospital viewers will see Britt face flak from Carly when she returns, because Carly will likely blame Britt too for the tragedy. Britt will be overwhelmed with grief, blaming herself for Jason’s presumed death, being forced to leave him on the island, and regrets for never telling him she still loved him. Her mother will try to help her understand that her love for Jason was obvious, and he probably knew even if he didn’t say it. Liesl will try to help Britt work through her grief and regrets as best she can, but it may take a long time!