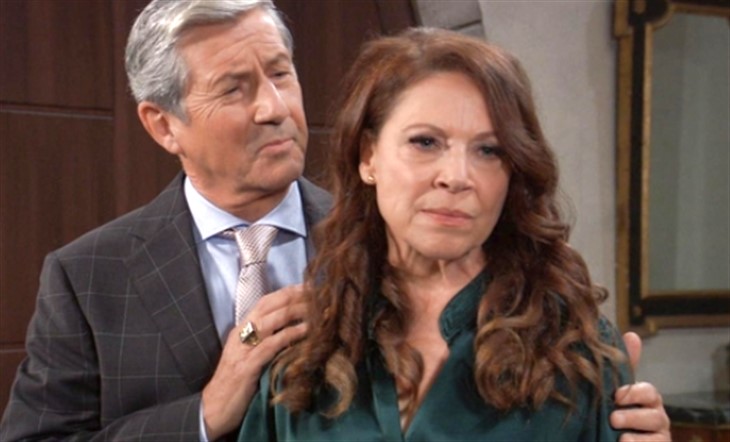 General Hospital (GH) spoilers for the Week of September 27, 2021 tease that Port Charles, New York is a couple of mobsters short of its usual retinue after a whiz-bang explosion took out two dastardly evil doers. Two heads of the Five Families are no more, and they only have themselves to blame!

Meanwhile, fans can look forward to another appearance by Liesl Obrecht (Kathleen Gati) who no one, ever, should underestimate. Why did silly Victor Cassadine (Charles Shaughnessy) think he could get the drop on the lovely bad girl? He really should have known better.

Let’s unpack what we have to look forward to this week GH, and get caught up on all of the PC comings and goings.

Dr. Liesl Obrecht was kidnapped by Victor Cassadine and if that sounds bad, consider the fate of her partner Scott Baldwin (Kin Shriner). Liesl was merely kidnapped, Scott was thrown out of a plane!

He survived because Scotty is indestructible, but Liesl must deal with Victor. Expect to see her again on Monday, September 27.

GH Spoilers – The Week Of September 27, 2021 Brings News Of Mobsters

Mr. Buscema (Bart Tangredi) and Vincent Novak (Glenn Taranto) will no longer be around to menace Sonny Corinthos (Maurice Benard). These two Five Families leaders went boom when they inadvertently blew themselves up.

Actually it was Jason Morgan (Steve Burton) who blew them up, but it was with their own bomb. Jason got word that the two meanies planted a car bomb to take out him and Carly Corinthos (Laura Wright) and wisely turned the tables on them. Won’t Gladys Corbin (Bonnie Burroughs) be sad.

Tangredi was on GH since 2015, and Taranto debuted as Vincent Novak in May.

What happens next now that there are two fewer mobsters in the world, specifically in PC? Sonny will be happy, but he will then be unhappy when he learns about Jarly and their barely suppressed feelings for one another.

Has anyone noticed that Sonny is his most Sonny-self when he is railing at Nina Reeves (Cynthia Nixon)? If we were making a bet, we’d put our money on these two to become the couple CarSon never could be.