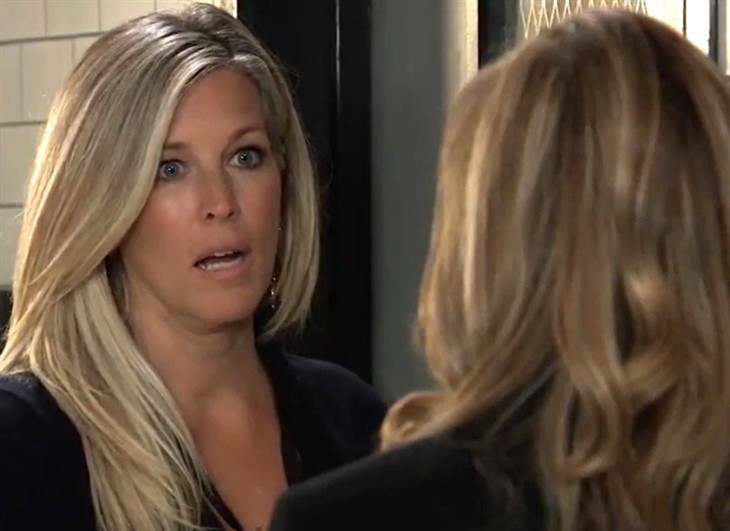 General Hospital (GH) spoilers and updates tease that Laura Spencer (Genie Francis) will investigate until she finds out Carly Corinthos (Laura Wright) was behind the unlawful transfer of Florence Grey (Annie Abbott) from Mountain Landing Care Home in upcoming episodes of General Hospital.

General Hospital viewers will remember that Carly pulled off the switcheroo by having Damian Spinelli (Bradford Anderson) hack into the computer system of the care home where Cyrus Renault (Jeff Kober) was keeping his and Martin Grey’s (Michael E. Knight) mother. GH recaps show she was transferred out to one of the Corinthos’ safe houses in Port Charles, where Carly has her mother, Bobbie Spencer (Jacklyn Zeman) caring for her.

Bobbie has a couple of other discreet nurses helping as well, as viewers found out when Bobbie went with Carly to Wyndemere to try and retrieve Avery Corinthos-Jerome’s (Ava and Grace Scarola) half-heart necklace that is actually Nelle Benson’s (Chloe Lanier). In that General Hospital episode, Bobbie assured Carly – and General Hospital viewers – that Florence adapted to her new place well and was doing fine. That would be a relief to her sons, if they only knew. Unbeknownst to Laura, Valentin Cassadine (James Patrick Stuart) is also on the trail of Florence, at the request of Martin.

Perhaps through Martin, Laura finds out Valentin is also trying to track down Florence and the two will compare notes. Laura agrees that Valentin was on the right track when he interrogated Jasper Jacks (Ingo Rademacher) to find out if he knew anything from Carly, who is besties with Jason Morgan (Steve Burton). Jason had taken the blame for Florence’s disappearance, which Carly had arranged as leverage against Cyrus, to provide Carly a cover, but he’s not saying anything.

With Sonny Corinthos (Maurice Benard) missing, and presumed dead, even though Jason officially has taken over his “businesses” he and Carly are partners. Carly takes a backseat to any mob business although now she would have a hand in running any of Sonny’s legitimate businesses. Viewers found out his not so legitimate businesses are a group of casinos in Puerto Rico in recent General Hospital episodes. There is a chance that Cyrus and Martin will meet over the disappearance of their mother and Laura may be included as well as Valentin, with it being Martin’s idea.

Now everyone who is searching can get more organized and although Laura and Valentin haven’t always been on the same page about practically anything, they will be on this issue. Regardless of what an evil person Cyrus can be, he deserves to know his mother is safe. According to General Hospital spoilers and updates, Valentin and Laura agree that Jason involves Carly in practically everything and even though Jax didn’t know anything he may start asking some hard questions of Carly as well.

Curtis Ashford (Donnell Turner) may be brought in on the search for Florence, and he may be able to find that the care home’s computer system was hacked and it leads back to a computer in Port Charles! Knowing Spinelli works with Jason frequently, it is not too difficult to figure out who hacked into the system!

GH spoilers show Laura still doesn’t want to believe Jason would do this, but what other enemy of Cyrus would be so dastardly? So, taking Valentin’s ideas, she goes to confront Carly about the disappearance of Florence and her transfer to what they all have figured out is a Corinthos safe house!