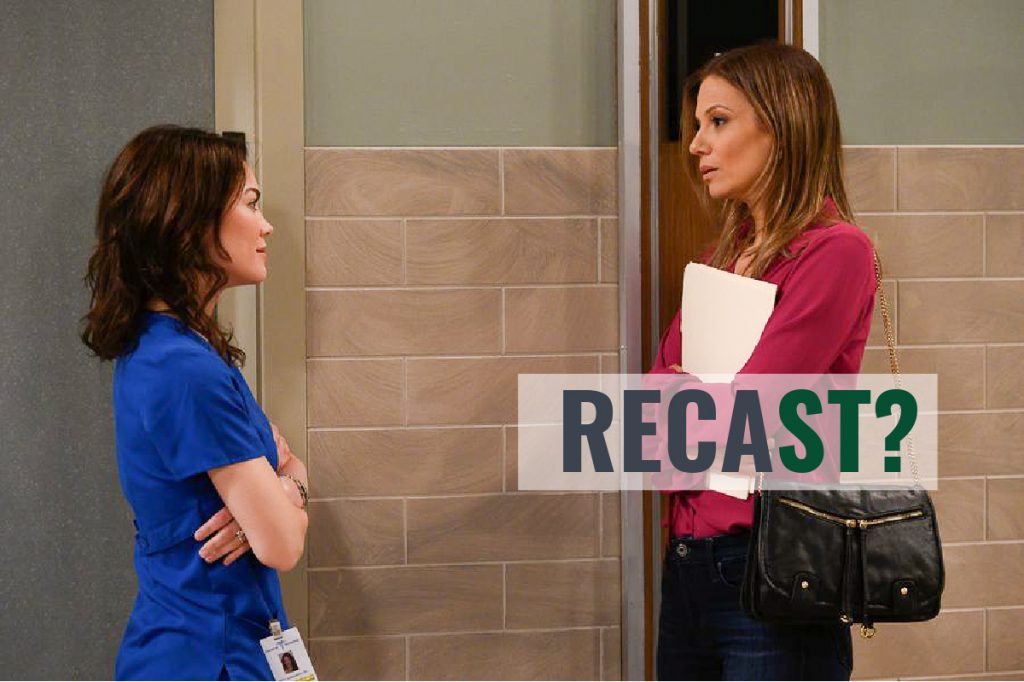 General Hospital spoilers tease that in Port Charles, NY Kim Nero (Tamara Braun) is being recast, according to a leak from someone claiming to be in the know at ABC. Tamara is unavailable right now, playing Ava Vitali on the NBC soap “Days of Our Lives”. The source hinted the new Kim would be someone who played a character on the CBS soap “The Young and The Restless”. The source didn’t say who would play Kim in her new incarnation, but here are some ideas for General Hospital fans to consider.

General Hospital viewers who also watch The Young and The Restless will remember there has been a lot of back and forth of actors between the two shows. There has also been back and forth of writers and producers in the past, so that may be one reason why. The most recent have been Michelle Stafford, who left her GH role as Nina Reeves to return to her Y & R role as Phyllis Summers. Tristan Rogers also played a con man named Colin Atkinson on The Young and The Restless, and made a couple of guest appearances while he has been playing Robert Scorpio on General Hospital.

Billy Miller also came from The Young and The Restless while Jason Thompson, formerly Dr. Patrick Drake, took Billy’s place on Y & R. Elizabeth Hendrickson, who played Margaux Dawson also came from Y & R and returned there. Most likely, the actress who will be Kim’s recast is not one who is currently on their roster of stars, it will be someone who played a character in the past. It likely won’t be anyone who has already played a character on General Hospital recently and migrated, as it would be too confusing for fans. Let’s take a look at some actresses who played on Y & R in the past who might make a good Kim! Rumors also persist that Drew Cain (Billy Miller) is alive and will return, although it is not sure whether it will be Billy or a recast for him or not. It would however give reason for a recast of Kim.

There are three past Young and Restless actresses who could make a very believable Kim Nero. One is Tammim Sursok. She played Colleen Carlton, a deceased character on The Young and The Restless. You may recognize her from “Pretty Little Liars” where she played Jenna Marshall for seven years, as well as playing Siena on “Hannah Montana”. Her look is similar to that of Tamara, with long light brown hair and some similar facial features. Next is Jessica Collins. She played Avery Bailey Clark on Y & R. More recently she had put on a little weight, and she is blonde, but so was Tamara when she played Carly Corinthos (now Laura Wright). More importantly, she played a character who had a romance with Steve Burton’s character when he migrated to The Young and The Restless for a few years.

If General Hospital chose to have Steve play dual roles as Jason and a returned Drew, chemistry is important, although it doesn’t always work when people play new characters as a couple. Think Kelly Monaco and Michael Easton. Their Port Charles mad chemistry as Livvie Locke and Caleb Morley just didn’t translate to Sam McCall and Silas Clay as a couple. Finally, there is Vanessa Evigan, who played Lauren Woodland from 1999-2000 on The Young and The Restless. If her name sounds familiar, she is the daughter of Greg Evigan who played the child abusing boyfriend of Betsy Frank (Deborah Strang), Jim Harvey! Any of these three don’t have current contracts on other shows and could be a believable recast of Kim!