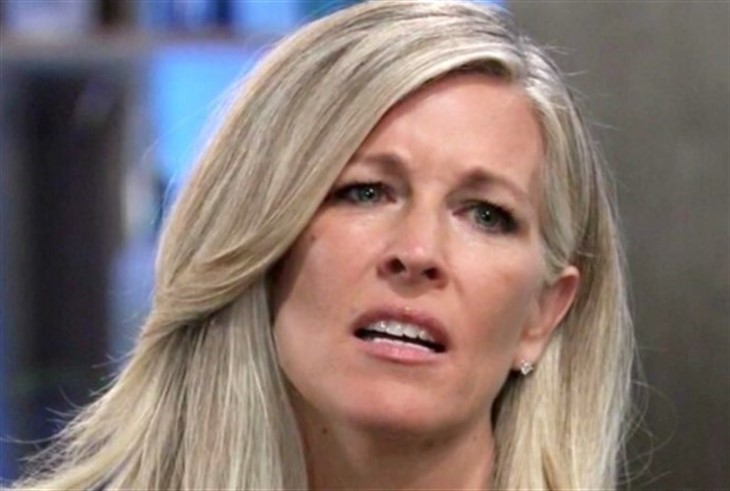 General Hospital spoilers for Thursday, April 15, 2021, reveal tension and drama in Port Charles as Carly is overwhelmed and half the town must feel it all with her.

Sonny (Maurice Benard) is presumed dead although we see him enough that fans know he’s alive. Too bad Carly (Laura Wright) doesn’t know because she is more overbearing than ever thinking she now has to be the mob boss.

That should be Jason’s (Steve Burton) job, but he’s behind bars and Carly (Laura Wright) is determined to prove he is innocent. (This time he is.) On Thursday, she gets on Elizabeth’s case once again as life overwhelms her.

Over in Pennsylvania, Sonny continues living his best life as a flannel-and-hoodie-clad bartender. He even has a friend from home by his side, but he doesn’t know it yet.

He does know he doesn’t trust Elijah (Dan White) and when Nina (Cynthia Watros) agrees for the man to take her on a tour of Nixon Falls, Sonny becomes suspicious and is determined to help this new blonde woman in his life. However, the new blonde has to finally decide what to tell Jax (Ingo Rademacher) now that he has her on the phone.

General Hospital Spoilers  – The Quad Has Some MAJOR Problems

Back in Port Charles, Willow (Katelyn MacMullen) is losing her mind with worry over Chase (Josh Swickard), as are his parents, Jackie (Kim Delaney) and Finn (Michael Easton). It’s obvious there was some kind of foul play involved and Anna (Finola Hughes) already knows it was her sociopath nephew who tried to hurt a member of Finn’s family. Will Chase survive?

Now that Willow is with Michael again and Sasha (Sofia Mattsson) knows, there’s always Brando (Johnny Wactor) as a consolation prize. When she runs into Brando she asks him to stop with the pretenses. Maybe they should admit they have feelings for one another.

Finally, General Hospital spoilers tease Michael (Chad Duell) acts as the talk-to for Dante (Dominic Zamprogna). We’re sure Michael can’t wait to tell his brother he is going to be with Willow forever. He also wonders if Dante will return to the force. Nope, it looks like Dante is going in a whole other direction. Tune into General Hospital weekdays to find out what Dante does next.