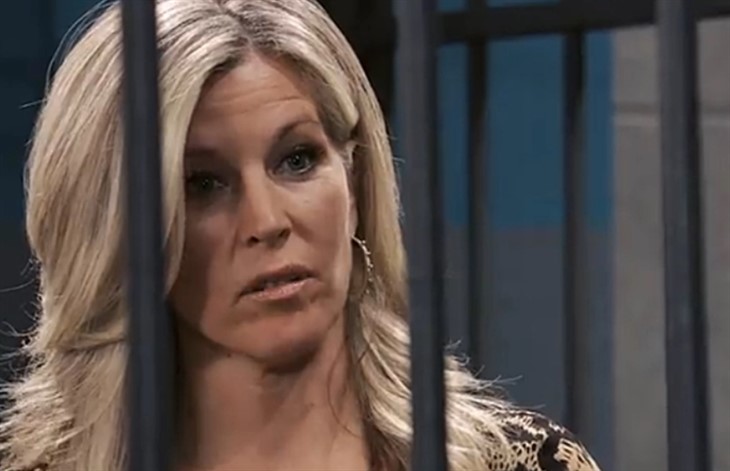 General Hospital (GH) spoilers show Carly Corinthos (Laura Wright) is trying to deal with many problems. She has had to take on an active role in running the mob organization that her husband Sonny Corinthos (Maurice Benard) controlled. Carly and nearly everyone else believes that Sonny died from falling from a bridge in New Jersey into the cold waters below.

Carly was getting help from Jason Morgan (Steve Burton) who is Sonny’s right hand man. Jason was dealing with Cyrus Renault (Jeff Kober) who is Sonny’s mafia rival. Carly decided to take Cyrus’ mother Florence Grey (Annie Abbott) to keep the peace between her family and Cyrus’ mob organizations.

According to GH spoilers, Cyrus is upset that Carly has his mother. Carly has been getting help from Jasper Jacks AKA Jax (Ingo Rademacher) who her former husband and father of her daughter Josslyn Jacks (Eden McCoy). He wants to help Carly to keep her family safe.

Jason had been taking care of Sonny’s affairs. He took responsibility for taking Florence to keep Carly safe from Cyrus. However Jason has been framed by Cyrus and Peter August (Wes Ramsey) for the death of Franco Baldwin (Roger Howarth). Jason has been sent to Pentonville Penitentiary to await trial. Cyrus wants his mother back. He told Carly that he would clear Jason’s name if Carly returned Florence to him.

Jason may be in dangerous place in Pentonville. Cyrus has allies in the jail on General Hospital that will do what he wants them to do. Cyrus may decide that he will do something to Jason if Carly does give his mother back to him. Will Carly give Florence back to Cyrus in order to keep Jason safe and clear his name?

General Hospital Spoilers: Jax May Get Into Trouble

Jax is determined to make sure that Carly and Joss are safe. He does not want Cyrus to come after them. Jax knows that Carly is trying to keep everyone safe but she is taking risks to do it. She has confronted both Cyrus and Peter.

Jax wants Carly to stay away from them both. Jax has a brother Jerry Jacks (Sebastian Roche) that has been involved with various criminal activities. Jax may believe that he can deal with Cyrus and Peter. He may get into a dangerous situation if he tries to confront them. Could Jax put himself into danger in order to keep Carly and Joss out danger?

General Hospital Spoilers: Carly May End Up Putting Jason and Jax in Danger

General Hospital Carly may do something to make Cyrus come after her. She may not return Florence to Cyrus. Cyrus may come after someone that Carly loves if he does not get his mother back. What would Cyrus do to Jason in Pentonville if Florence is not returned safely to him? Would Cyrus go after Jax if he tries to deal with him directly? Carly is trying to protect the ones that she loves but has not known the right way to do it.

Tune into General Hospital to find out if Carly will do something that puts Jason or Jax into a dangerous situation.  Keep checking Soap Opera Spy for more General Hospital spoilers, news, and GH updates.