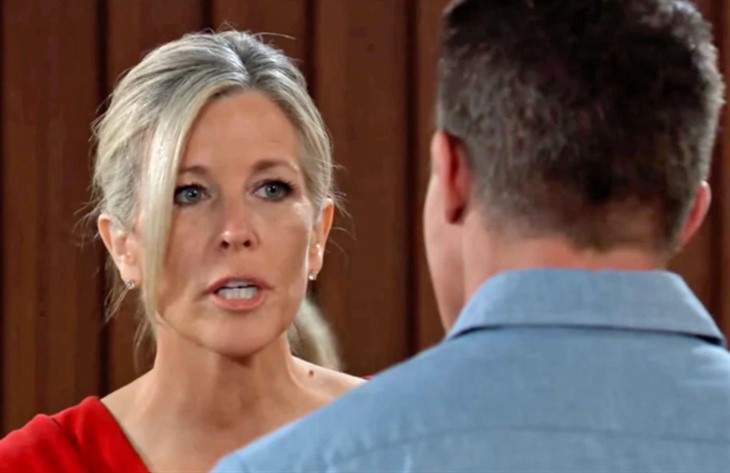 General Hospital spoilers for Wednesday, April 21, 2021, reveal Sonny making his stay in Nixon Falls all the more complicated, as Jason tries to put Carly in her place.

Sonny (Maurice Benard) might call himself Mike and say he likes it in Nixon Falls, but those Sonny instincts are always there right beneath the surface. He really seems to like Nina (Cynthia Watros) and worries about how close she is getting to Elijah (Dan White) when he knows Elijah is nothing but a criminal. (Sonny should know he is a criminal too.)

On Wednesday, the tensions between them explode. With the famous small town dance upon them, someone is bound to get hurt when two men with nasty tempers interested in the same woman. It does look like two cowboys are about to have quite the brawl.

General Hospital spoilers say that Phyllis also gets a surprise. Does this have to do with a visitor for Nina?

GH Spoilers – Did Carly Corinthos Cause A Catastrophe?

Back in Port Charles, Jason (Steve Burton) is furious with Carly (Laura Wright) for going against Anna’s (Finola Hughes) wishes in her plot to trap Peter (Wes Ramsey). He also can’t believe she took her eyes off the ball long enough for Cyrus (Jeff Kober) to get his mother back.

Carly is ready to move with their latest plot to keep Cyrus in check and clear Jason’s name, but Jason wants Carly to put a stop to everything before she screws things up further.

Scott (Kin Shriner) knows it wasn’t Jason who killed Franco (Roger Howarth) but Elizabeth (Rebecca Herbst) still doesn’t suspect Peter at all. Scott does not like thinking Cameron (Will Lipton) is ruining friendships by blaming the wrong guy so he stops by the Webber-Baldwin house to have a talk with Cam and set him straight.

Elizabeth is a bit suspicious as to what Scott wants to say to Franco, but she agrees to let the older man and the younger man talk. Will Franco believe what Scott has to say?

GH Spoilers – What Will Willow Tait Do?

Over at GH, Chase (Josh Swickard) seems to be recovering and he is pleased that Willow (Katelyn MacMullen) has been by his side. Sadly, he can also tell there’s something she wants to say to him but is holding back.

As for Willow, she’s not quite sure what to do. She cares for Chase and wants to see him get better, but she just made a commitment to Michael (Chad Duell). Will it be Michael who sets her on the right path — but for selfish reasons? Stay tuned to General Hospital weekdays to find out.