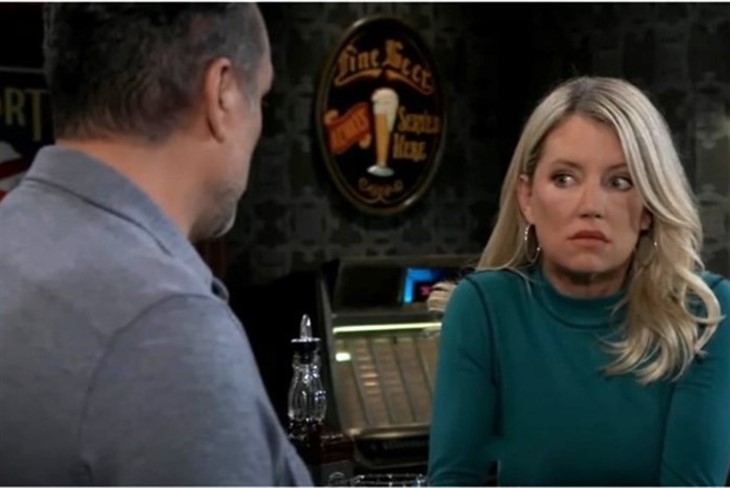 General Hospital (GH) spoilers tease that Nina Reeves (Cynthia Watros) will play it cool on the dance floor with “Mike” Sonny Corinthos (Maurice Benard) when they go to the firehouse dance in an upcoming episode of General Hospital!

General Hospital viewers will recall that “Mike” aka Sonny has been suspicious of Elijah Crowe (Dan Martin) from the get-go. He warned Nina in a recent General Hospital episode that he didn’t think Crowe was what he presented himself to be.

Sonny’s bad guy radar has been working overtime on General Hospital and viewers will recall he put Crowe on notice. Tensions escalated between the two as the two sat at a table in the Tan-O and Sonny told him his story didn’t add up. Even without his trusty sometimes sidekick Brick (Stephen J. Smith) Sonny did his own investigations and found quite a bit on Crowe, and much of it that Crowe probably didn’t want people to know!

General Hospital spoilers show that Elijah Crowe is just as suspicious of “Mike” as he is of Crowe, and by this time, they probably both have information they could use as leverage on the other, but Sonny appears to be ahead of the game!

But the guy is just simply making himself way too obvious at the firehouse dance, and giving Sonny and Nina the evil eye as they are on the dance floor, while Crowe doesn’t seem to be there to dance. He doesn’t have a lady with him, he’s solo, and seems like he’s borderline jealous over Nina! Nina had made it plain to him that when he took her around Nixon Falls, Pennsylvania as part of her research for the article she plans to put in Crimson Magazine, it was strictly business although she was friendly with him.

GH spoilers reveal Nina may not realize what’s going on but Sonny sure does! Sonny thinks Crowe is staring just a little too much although it is hard to tell whether it’s at him, at her, or at both of them! Nina feels safe with Sonny but she doesn’t think that Crowe is looking at her “that way”.. perhaps “Mike” is the one who is jealous over her! Either way, she doesn’t need or want Elijah Crowe contacting anyone back in Port Charles, say at the Crimson office or worse, Jasper Jacks’ (Ingo Rademacher) office talking about her dancing with a guy at the Tan-O!

Crowe doesn’t seem to know who Sonny is, other than one of Phyllis Caulfield’s (Joyce Guy) “strays” but he definitely knows who she is now, and the last thing she wants or needs is Jax hunting her down! He’s already called her and tried to talk her into coming back to Port Charles, and was intent on coming to her himself and bringing her back!

Nina kept the call very short and not so sweet on General Hospital because she wouldn’t put it past him to try and trace her cell phone signal – although in a town out in the middle of nowhere like Nixon Falls, cell towers are few and far between! If it wasn’t so remote, and off the grid Sonny would have been found long ago. Still, she plays it cool on the dance floor with Sonny, because she doesn’t want Crowe getting any wrong ideas – about anything!