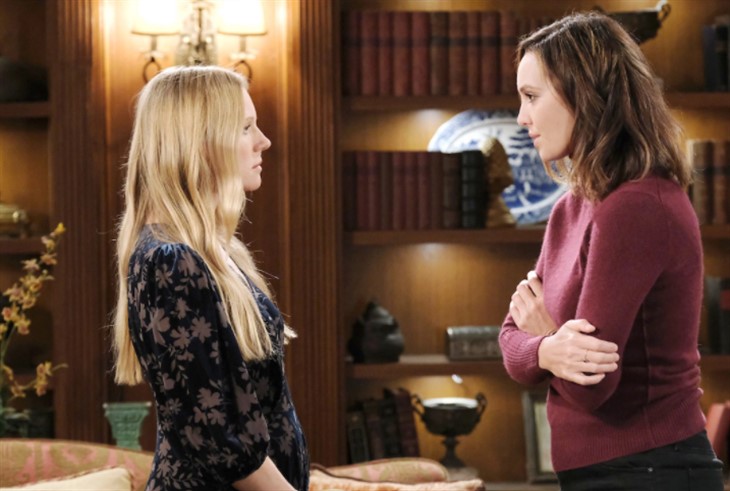 DOOL spoilers reveal that pregnancy has been speculated ever since Gwen and Chad DiMera’s (Billy Flynn) one-night stand. The pregnancy storyline is kicking off four months after their night of drunken passion. There are a lot of different theories viewers have about Gwen’s pregnancy. Some think she is faking, some wonder if she got impregnated with Stefano’s clone baby, or Gwen might have slept with Charlie.

However, it turns out that none of those are correct. Gwen also isn’t using the baby to get under Abigail DiMera’s (Marci Miller) skin or get her hands on the DiMera fortune. The actress says that this is not something that Gwen wants.

Speaking to Soap Opera Digest, O’Brien explained that the baby poses a “complete obstacle” to Gwen getting what she wants. Apparently, she no longer wants revenge — although there will always be that tension with Abigail. Even though no one believes this, including viewers, Gwen actually wants the Deveraux family plan. She worries that the child will create a bigger rift between her and Abigail, which could threaten her relationship with Jack Deveraux (Matthew Ashford).

Days of Our Lives spoilers reveal that pregnancy was not in Gwen’s plan. As she worries about what to do, Abigail overhears. She offers to take Gwen to a clinic to get an abortion. Gwen is considering this option, but Jack encourages her to take time to think and process the pregnancy first.

O’Brien explains Gwen’s thought process during this storyline. The actress says, “She sees it as a complete obstacle for herself, for Chad, for everybody, because she’s just starting to become close to her father and something like this happens and it’s really going to put a bomb into that family…”

Even though this was not part of Gwen’s plan, she could use this and twist it to her advantage. It might not necessarily be to hurt Abigail, either. All of Gwen’s life, she has been bitter over not having a real family, which had her target Abigail. What if she stepped away from the Deveraux family and Salem by creating her own family?

What do you think of Gwen’s pregnancy? Will she get an abortion, have a miscarriage, or actually carry the baby to term? How will this impact Abigail, Chad, Jack, and the rest of the characters?