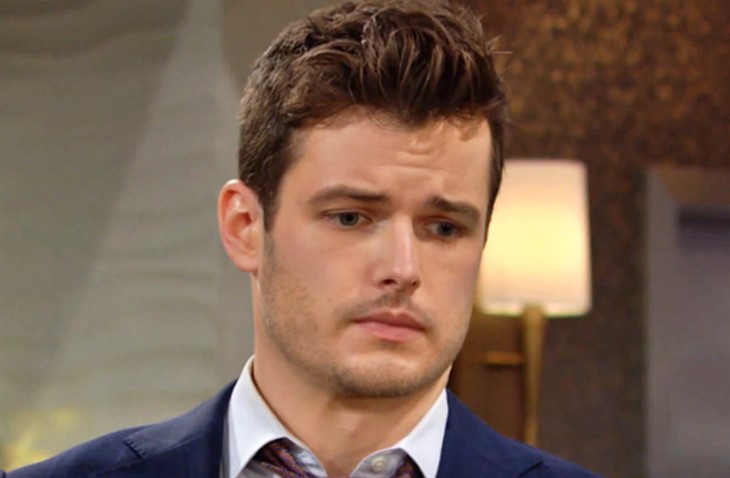 The Young and The Restless (Y&R) spoilers tease that Kyle Abbott (Michael Mealor) will decide to confess his truth in an upcoming episode of the CBS soap opera!

Viewers of The Young and The Restless will remember that Kyle didn’t quite tell everything to his father, Jack Abbott (Peter Bergman). Summer Newman (Hunter King) knows that the affair with Tara Locke (Elizabeth Leiner) produced a child, but Kyle chose not to tell his father. Jack wanted to protect Kyle by meeting with Ashland Locke (Richard Burgi) on his own after Kyle told him that Locke was returning to Genoa City and had wanted to meet with him.

Y&R spoilers show Jack and Kyle had no interest in Cyaxeres Media, it was only Jack’s younger half-brother Billy Abbott (Jason Thompson) that had bid for the company. Billy had asked Jack for financing for his bid, but Jack had turned him down! Kyle had met with Locke on his own after all, and told his father that he wanted to know if he had slept with his wife, which was Kyle’s – and Jack’s greatest fear!

Viewers of The Young and The Restless will recall that Summer was very worried that if Locke found out about Kyle’s affair with Tara that he would crush him and everyone he cared about, and with the smear campaign against Jabot, it seems to have happened! Tara now has come to Genoa City again, either with Ashland or following him, and Summer spies Kyle and Tara talking. Summer knows that this cannot end well!

Young and Restless spoilers tease Kyle decides that he had better confess about his child to Jack, even if he would expect him to man up and be a father to him! However, considering the monster that Ashland is, Jack may make an exception!

Longtime viewers of The Young and The Restless will remember that Jack once had a secret son pop up in his life too – Keemo Volien (Phillip Moon) who showed up in Genoa City, along with his mother Luan Volien (Elizabeth Sung). Jack had a romance with Luan when he was in the military overseas in Vietnam, and twenty something years later he found out she had her own restaurant, The Saigon Shack there in town.

It was Christine Blair’s (Lauralee Bell) favorite restaurant, and Luan had been shot in a robbery. She asked Chris to find Keemo before she died – fearing the gunshot wound would kill her. As it turned out it was a terminal disease undiagnosed at the time of the gunshot that did her in, but not until after she and Jack were reunited and married. Christine and Paul Williams (Doug Davidson) traveled to Vietnam to find Keemo and his sister Mai Volien (Marianne Rees) back to Genoa City.

It was also Christine on Y&R who figured out that Luan and Jack conceived Keemo and got them back together. Kyle never knew his older half-brother – he and Mai left Genoa City after the death of Luan and have not kept in touch. Jack tells him the story to prove that he understands the shock of finding out about a secret child.

As expected, The Young and the Restless spoilers reveal Jack tells Kyle that even though he believes Tara, since she hadn’t wanted to tell him at first, a paternity test should be done – but to not involve Ashland. That way if it turns out that Kyle is not Harrison’s father, any fears of Ashland finding out Harrison is not his will be avoided.