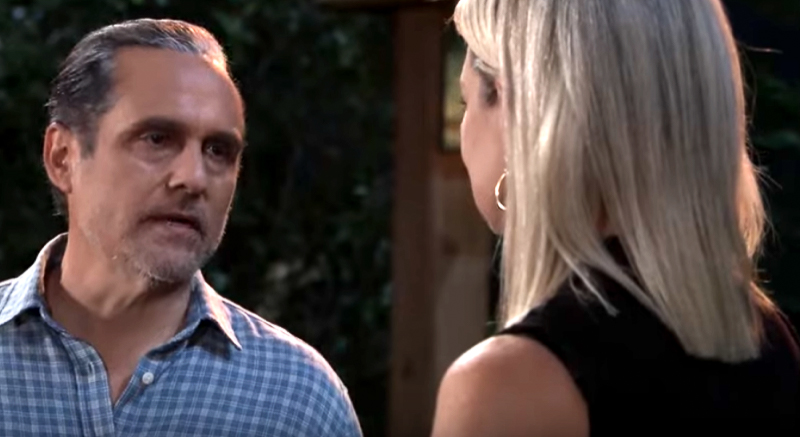 General Hospital spoilers reveal that Phyllis Caulfield (Joyce Guy) talked about marrying Lenny Caulfield (Rif Hutton) quickly even though everyone said not to. Phyllis told Sonny Corinthos aka “Mike” (Maurice Benard) that she didn’t regret that now that Lenny is gone. Could Sonny decide to do the same with Nina Reeves (Cynthia Watros)?

GH spoilers reveal that Sonny and Phyllis had a conversation about relationships. Phyllis told him about meeting Lenny and marrying him right away. Everyone told her not to but she knew that she had found “the one.” So, she married Lenny right away and never regretted it. Phyllis was telling Sonny that life is short and there are no guarantees. So, if he feels that he has found “the one,” then he shouldn’t waste any time. It’s understandable the message Phyllis was trying to convey. However, she doesn’t know that Sonny is already a married man with children.

It might have been a hint that Sonny might propose to Nina. Ever since Lenny died, Sonny has been determined to live his life to the fullest. He is painfully aware that there are no guarantees and he or Nina could die anytime. This, along with Phyllis’ story, could compel Sonny to unexpectedly propose.

General Hospital spoilers reveal that Peter August (Wes Ramsey) wanted Nina to explain why she was with Sonny. Nina said that to her, he is not Sonny but “Mike.” Nina can try to justify this all she wants but the truth is that Sonny is married to Carly Corinthos (Laura Wright) and has children. Sonny’s daughter, Donna Corinthos (Ella and Emma Hulen) doesn’t even remember him. She thinks that Jason Morgan (Steve Burton) is her father.

Benard said in an interview with Michael Fairman TV that “all hell will break loose” when Sonny’s memories return. However, he also hinted to Soap Opera Digest and on Twitter that Sonny won’t be able to turn his feelings off like a switch. It was apparent that Benard was teasing that Sonny’s feelings for Nina might complicate his relationship with Carly.

Likewise, Carly is going to tell Jason how she really feels, so her end will also be complicated. It sounds very messy and we have to wonder how this story will end.

Do you think Jason and Carly will actually get married or will the truth come out before then? What will Sonny do about his feelings for Nina when his memories return? Can Sonny and Carly ever get back what they had or will too much have happened?

The Bold And The Beautiful Spoilers: Brooke And Li Team Up To Go After Sheila