The Bold And The Beautiful Spoilers: Brooke And Li Team Up To Go After Sheila 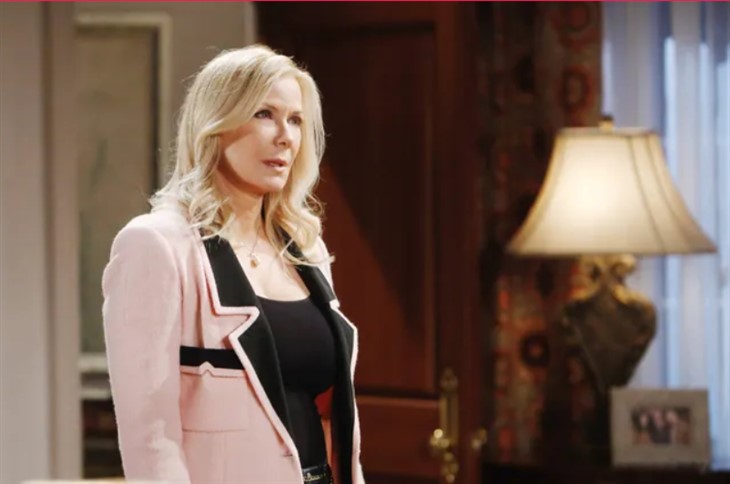 The Bold and the Beautiful (B&B) spoilers and updates tease Sheila Carter (Kimberlin Brown) is going to cross the line. Sheila wants to have a relationship with her son Dr. John Finnegan (Tanner Novlan). She wants to be a part of his life and her grandson Hayes Finnegan’s (Samantha Worden and Piper Harriot) life. Sheila has gotten Jack Finnegan (Ted King) to arrange for her to spend time with Finn and Hayes.

She is blackmailing him. Jack had an affair with Sheila when he was married to his wife Dr. Li Finnegan (Naomi Matsuda). Jack does not want Li to know about the affair. Steffy Forrester (Jacqueline MacInnes Wood) does not want Sheila to be a part of her family’s life. Sheila has hurt many people that Steffy loves. Steffy was upset to see Sheila with Hayes and Finn. Li will be upset to find out that Jack took Sheila to see Finn and Hayes.

Li needs help to stop Sheila from destroying Finn and Steffy’s relationship. She could turn to Brooke Logan Forrester (Katherine Kelly Lang). Brooke is Steffy’s step-mother. She loves Steffy like she was a daughter. Brooke was shocked when she saw Sheila come into Steffy and Finn’s wedding reception. Brooke and Sheila have a bad past. Sheila shot Brooke at one time. Brooke will want to make sure that Sheila does not try to hurt Steffy, Finn, or Hayes.

Brooke and Li do not know each other but they both love their families. Li does not know that Jack had an affair with Sheila. She does not know that Jack is really Finn’s father. Li is going to be upset to find out that Jack kept the secret that he is Finn’s father from her. Li will need to keep Jack safe from Sheila who could decide to try to hurt him. Brooke could help Li to find a way to stop Sheila from going after Jack.

The Bold and the Beautiful Sheila is a dangerous woman. She will hurt anyone that stands in her way of getting what she wants. She will want to have more time with Finn and Hayes. Brooke will need to get her husband Ridge Forrester (Thorsten Kaye) to help her to keep Steffy and her family safe. Ridge wants to protect his daughter from Sheila. He wants to get a restraining order against Sheila. Can Ridge help Brooke to protect Steffy and her family? Li needs help to stop Sheila from destroying her family.

Can Li get help from Ridge to protect Finn and Hayes? Li will be surprised and upset when she finds out that Jack had an affair with Sheila. Can Li forgive Jack? Can Li find a way to protect Jack from Sheila? Brooke and Li will have to be on their guard when they deal with Sheila. Can Brooke and Li find a way to keep the ones they love safe from Sheila? Be sure to catch up on everything happening with B&B right now. Come back here often for The Bold and the Beautiful spoilers, news, and updates.

The Young And The Restless: Brytni Sarpi Shares Important Message