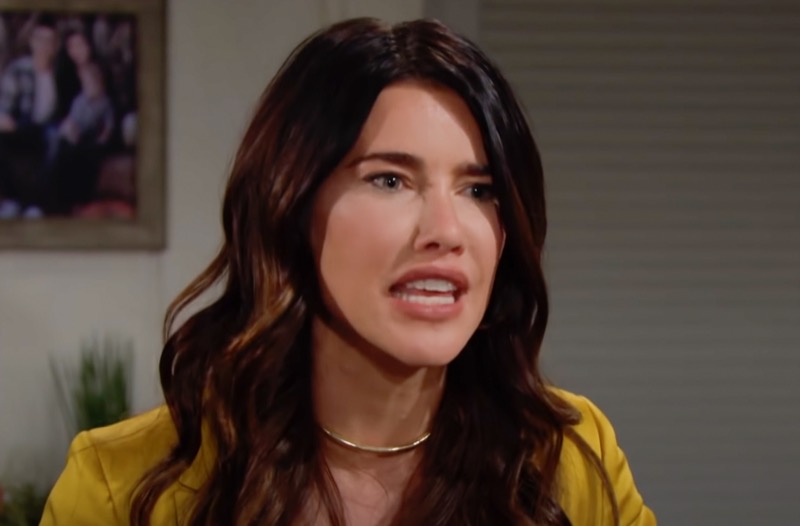 The Bold and the Beautiful (B&B) spoilers for Monday, August 30, 2021, reveal in Los Angeles the fallout from Finn making the mistake of letting Sheila Carter into Steffy’s home and then letting her hold baby Hayes.

The Bold and the Beautiful Spoilers: Steffy Kicks Finn Right Out

Steffy (Jacqueline MacInnes Wood) is not putting up with Sheila Carter (Kimberlin Brown) in her living room holding her son and blew a gasket on Friday, taking everyone to task in her Steffy Forrester way. This was a side of his new wife that Finn (Tanner Novlan) has never seen and he looks terrified. He is also in for quite a shock.

Steffy kicks him right out of her house. No, he can’t live there and be married to her if Sheila is a part of his life. He made a promise to her and broke it. But in all fairness, he was ambushed by his own father who is desperate to save his own marriage. Still, Finn could have told Sheila to leave and could have made sure she walked right out, without handing the baby over to her for Steffy to see. While he didn’t think Steffy would be home so soon, it was still a bonehead move and one he will pay for.

It doesn’t matter that Sheila already ruined her son’s very young marriage. She’s obsessed now and wants more. After what happened with Steffy and the baby, Finn doesn’t want anything to do with this woman who says she is his mother, but that doesn’t mean Sheila is about to give up any time soon. She got a taste of her son and grandson and wants as much more as she can get.

To that end, she spends more time blackmailing Jack (Ted King) on Monday. Jack seems to be more concerned with his own marriage than with his son’s, so Sheila pretty much has the man wrapped around her little finger. There is no way that Li can find out that Finn is biologically his and not adopted — and a result of an affair he had with Sheila. Does that mean he will keep on doing Sheila’s bidding? Stay tuned to The Bold and the Beautiful weekdays to see how these stories play out.