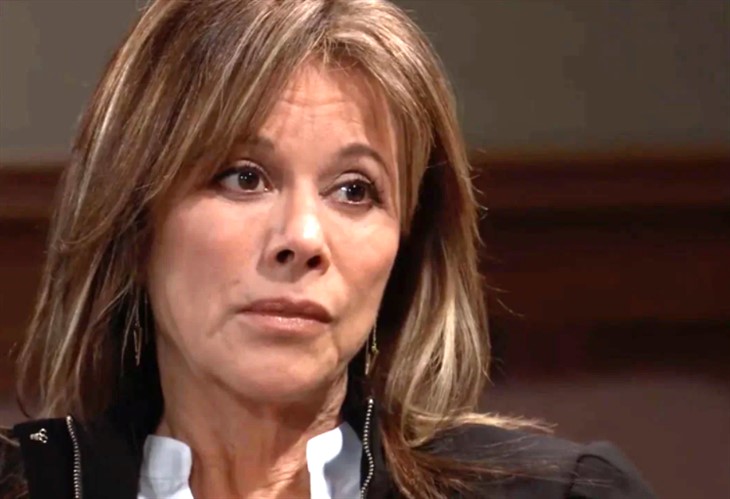 General Hospital spoilers show Laura (Genie Francis) and Ava (Maura West) did their best to convince Nikolas (Marcus Coloma) that he needed to stay away from Cyrus Renault at all costs. But Nikolas refused to listen as he felt Cyrus (Jeff Kober) was his best means to keep Alexis safe in prison. After all, he’d do anything for his aunt.

Well, now Alexis (Nancy Lee Grahn) is in trouble as she’s ticked off the stereotypical prison bully, meaning she already has an enemy behind bars. When Laura learns that her son involved Cyrus in his little protection racket in exchange for Florence Grey’s whereabouts, she’s furious.

This is more trouble than they are asking for and Laura begs Nikolas to call his entire operation off right now. According to General Hospital spoilers, Cyrus is too dangerous a man and he already took one child from Laura via a comatose Lulu (Emme Rylan). She’s not about to let him take another.

On the opposite side of the prison, Jason (Steve Burton) has a visitor in the form of Anna (Finola Hughes). She is also concerned about the mess Cyrus can cause in her quest to bring down Peter August (Wes Ramsey). She knows Cyrus supplied the cops with a false witness to Franco’s (Roger Howarth) murder in order to protect Peter and she’s determined to figure out why.

But first things first. GH spoilers show Anna begs Jason to tell Carly (Laura Wright) to step down. Between Cyrus and Carly, she can see her whole Peter sting coming apart at the seams and needs Jason to work his magic on his BFF. The trouble is, Carly barely ever listens to anyone.

Maybe Carly should pay more attention to her teenage daughter. At least Joss (Eden McCoy) has Trina (Sydney Mikayla) and Cam (William Lipton). Trina tells Joss that Cam definitely has a thing for her and if she’d just open her eyes, she’d see it.

So, Joss decides to do just that and visit Cameron. The two take steps to make amends and end up growing closer. Will Cam finally admit he’s had feelings for Joss forever?

GH Spoilers – What’s Next For Jordan And Curtis Ashford?

Curtis (Donnell Turner) and Jordan (Briana Nicole Henry) decided to call it quits and divorce and it looks like Jordan is a whole lot more broken up about the whole thing than Curtis. She is so broken up that she turns to Taggert (Asante Jones) for comfort. Will one thing lead to another after their little talk? Stay tuned to General Hospital each weekday to find out.