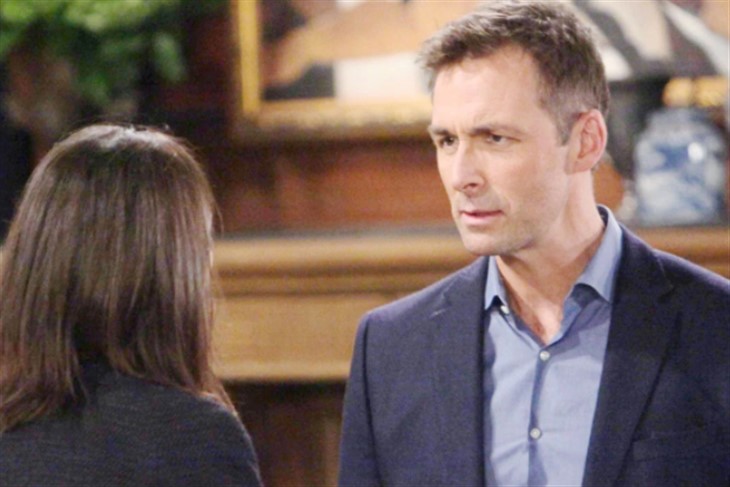 General Hospital (GH) Spoilers and rumors suggest that although Valentin Cassadine (James Patrick Stuart) used Anna Devane (Finola Hughes) as a cover when approached by Jordan Ashford (Briana Nicole Henry), there may be some truth to his cover statement. Does Valentin love Anna?

General Hospital’s Valentin and Anna worked together for the WSB years ago. Valentin was also exposed to Anna’s sister, Alex Marick (Finola Hughes) as well. Valentin was the one who took Peter August (Wes Ramsey) from his adoptive family and handed him over to Caesar Faison as an infant. Valentin did it to get back at Anna, unfortunately, he later learned that Peter is Alex’s son. Valentin was unaware of the memory mapping. Later, Valentin learned with Anna, that Peter was not her son. However, the two thought he had changed and kept the secret.

General Hospital’s Valentin and Anna have had a volatile relationship but he has been her confidant since Peter was revealed as Anna’s son. Anna blamed Valentin for giving Peter to Faison, however, she also used him to get to know Peter as well. Valentin was a constant presence in Peter’s life.

General Hospital recaps reveal Anna would often tell Valentin her wishes for Peter and all of the evidence that she had seen against him. Anna also told Valentin the truth about the DNA test that he lied to her fiance’ about. Valentin and Anna have continually talked about Peter and his parentage as well as his upcoming marriage. Anna And Valentin are closer than they like to admit.

As soon as General Hospital’s Valentin found out what Peter had done, he immediately went to Anna. Valentin felt the need to tell Anna that truth. Valentin cares about Anna and Maxie Jones (Kirsten Storms) as well. Valentin knows that Maxie is in danger as long as she is with Peter. Valentin knows that Peter got rid of Drew Cain (ex-Billy Miller). Valentin is just now realizing how dangerous Peter is to anyone associated with him. Valentin and Peter have always been close but he cannot cover for Peter knowing how it affects Anna and everyone else attached to him.