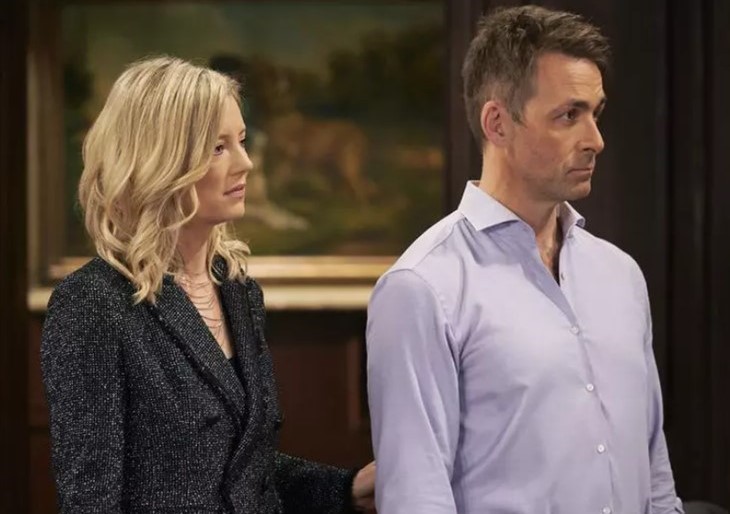 General Hospital (GH) viewers will remember that there are two broken hearts over mistakes they made in the past. Valentin Cassadine (James Patrick Stuart) regrets he handed a baby boy to an evil father years ago. Nina Reeves (Cynthia Watros) regrets she never had the chance to know her baby girl’s identity or to have raised her while she was still alive. Nina and Valentin will reconnect over their regrets in an upcoming episode of General Hospital!

Valentin tells Nina the story of Peter August (Wes Ramsey) in its entirety, including the crimes that he committed. Nina wasn’t at the wedding and hasn’t connected with Maxie Jones (Kirsten Storms) or Britt Westbourne (Kelly Thiebaud) so for all intents and purposes, she is out of the loop! Nina knew Peter had done some bad things in the past but had no idea he had set up the death of Drew Cain, (Billy Miller) and all the other crimes that she had thought her Aunt Liesl Obrecht (Kathleen Gati) had committed.

She knew nothing about Liesl having been exonerated and was shocked to hear she was back in Port Charles! Then Valentin starts talking about Peter as a baby, and how he thought he was Anna Devane’s (Finola Hughes) but it was revealed he was Alex Marick’s (Finola Hughes) at the wedding, by Liesl.

He tells Nina the whole sad tale of how after following the woman he thought at the time was Anna to where she gave birth, and then tracking the baby to his adoptive parents and getting him back and giving him to his birth father, Cesar Faison (Anders Hove). He knew it was a mistake very soon afterwards and that is why he kept an eye on him throughout his life – Valentin knows if he had left well enough alone, Peter may have grown up with a good family who loved him and raised him right.

Nina can so relate to Valentin’s feelings about Peter and how he turned out, as well as the responsibility Valentin feels! She agrees that if Peter had not been raised by Faison, even with so much of his life being away at school, people who truly loved and wanted him raising him could have made a difference. She tells Valentin about Nelle Benson (Chloe Lanier) having been raised by Frank Benson (James Patrick Stuart in the Nelle-centric flashback episode) and how she feels the same way about her.

If she, or even different adoptive parents had raised Nelle and she had gotten the love she so desperately needed, she may have turned out much differently as well. Nina tried showing her some motherly love even when she had no idea that she was her mother, but by that time, it was too late. Nina regrets she couldn’t break through the brokenness that was in Nelle, and be able to fix her. Valentin regrets not showing Peter tough love when he had the chance to, but he too wonders if it would have done any good.

They have a long conversation about nature versus nurture, with Nina of course being on the nurture side. She tells Valentin everyone, no matter what they grow up to be, starts out as an innocent baby and deserves to have a chance to grow up to be a good person. She also thinks, but doesn’t say out loud, that applies to Valentin, too. Perhaps he deserves another chance.

The Bold And The Beautiful (B&B) Spoilers: All Paris Wants Is Honesty, Not Status Or Money, Diamond White Explains