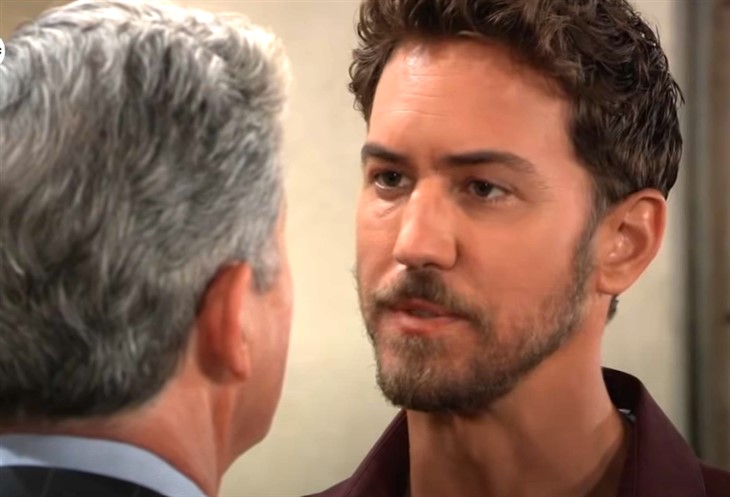 General Hospital Spoilers tease that Peter August (Wes Ramsey) has no loyalty to anyone but himself. As viewers recently discovered, Peter has allied himself with Victor Cassadine (Charles Shaughnessy). Peter’s mission was to locate the “key” to controlling Drew Cain (Cameron Matheson). It seems when Cesar Faison (Anders Hove) first brainwashed Drew, there were two levels of conditioning. The first one was discovered and Drew was deprogrammed. But a second level was also administered by Faison.

In return to locating the key, Victor’s task was to locate Peter’s baby girl and bring both the baby and it’s mother, Maxie Jones (Kirsten Storm) to Peter so that he can whisk them both away never to be heard from again. But Peter has plans of his own. He has already located the key (The Tower Card from a Tarot deck) and has activated Drew to follow “his” commands, not Victor’s.

Peter has no shortage of enemies, but the most likely targets are those who provide the most immediate danger. First on that list would be Valentin Cassadine (James Patrick Stuart). Victor had Valentin abducted because he needs his help against Peter. Peter might very well be prepared to take Valentin, and possibly Victor as well down for good. And then there is Dr. Leisl O’Brecht (Kathleen Gati).

Another thorn in Peter’s side is O’Brecht. She took Peter hostage once and almost killed him. And she was on her way to St. Lucia after Nina Reeves (Cynthia Watros) asked her to take care of Peter once and for all. That plan failed thanks to Victor, but Peter may want to make sure that O’Brecht is no longer a threat. Of course, Peter might want to kill Anna DeVane (Finola Hughes) more than anyone else on this list.

Anna believed for over a year that she was Peter’s mother. But thanks to the memory mapping program, her memory of giving birth to Peter were not her own. Instead, Anna’s twin sister, Alex DeVane (also Finola Hughes) was the one who gave birth to Peter. When Anna discovered the truth, she wasn’t as keen on protecting him. She finally realizes just how dangerous he was and promptly turned against him. Peter is still not over the betrayal by the woman until just a few months ago, he called “mother”. But it would seem as though Peter would want to do that job himself, rather than forcing Drew to do it.

Is Drew firmly under Peter’s control? Can he break free? Will Peter send Drew to kill someone he loves? Anything can happen in Port Charles, so stay tuned to General Hospital airing weekdays on ABC. And don’t forget to check back right here regularly for all your General Hospital news, information and spoilers!

B&B Spoilers: Sheila Carter Has A New Devious Plot – Finn Has Another Secret