B&B Spoilers: Sheila Carter Has A New Devious Plot – Finn Has Another Secret 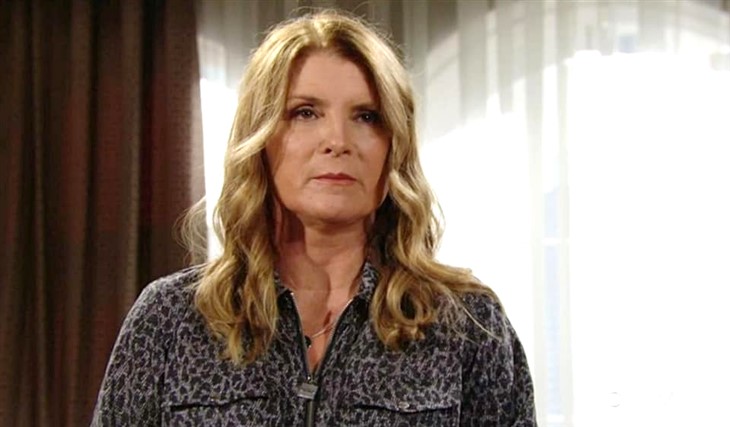 The Bold and the Beautiful (B&B) spoilers for Friday, October 8, 2021, reveal Sheila with yet another diabolical plot to get rid of Steffy and get Finn and Hayes for herself. And this time she has a partner.

The Bold And The Beautiful Spoilers – What Is Sheila Carter Up To Now?

Sheila Carter (Kimberlin Brown) has never been a woman who gives up. Just ask Lauren Fenmore (Tracey Bregman) over in Genoa City. That woman tortured her for years and Lauren apparently still has no idea she is alive. No matter how many times Finn (Tanner Novlan) tells her that she has to stay out of his life, Sheila doesn’t give up. Sure, she has other kids out there, but Finn is the one she is obsessed with now. She just knows she has to get rid of Steffy (Jacqueline MacInnes Wood) and so far, she hasn’t had much luck.

But her luck is about to change now that Deacon Sharpe (Sean Kanan) is back in town. This pair is ready to team up and break some established couples apart so they can get what they want out of life. Look out, LA!

B&B Spoilers – John Finn Finnegan Has Another Secret To Keep

So far, Steffy has had more drama in her short marriage than she has the stomach for, but she thinks it’s over. After all, Finn has chosen her several times now and told Sheila to go away and never come back. The problem is, Finn doesn’t feel as sure as he lets on that he doesn’t want to know the woman who claims she gave birth to her.

Who will Finn confide his secrets to this time? Paris Buckingham (Diamond White) has moved out and seems to have admirers in Zende (Delon De Metz) and Thomas Forrester (Matthew Atkinson), who act like the woman walks on water. Well, Finn has been awfully friendly with Hope of late. Does he stop by the cottage and get to know her dad? If so, this can be a wild ride because he has no idea what Deacon is up to with his mom. Are Hope and Finn going to be Sheila and Deacon’s victims when all is said and done? Stay tuned to The Bold and the Beautiful weekdays to see how these stories play out.