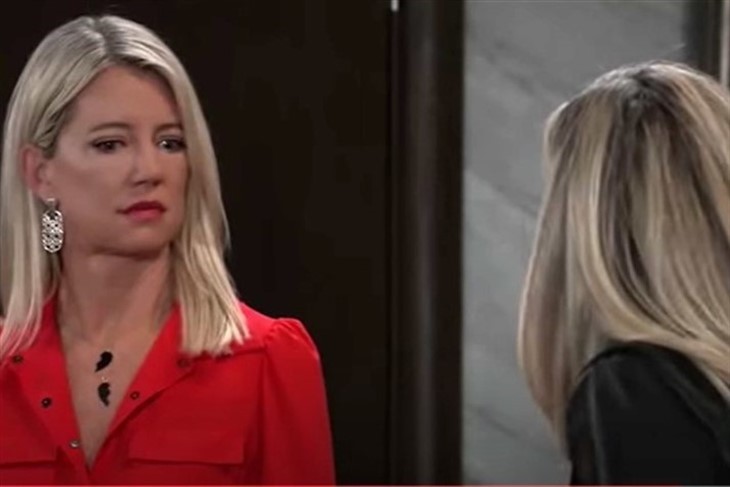 General Hospital (GH) spoilers show Nina Reeves (Cythnia Watros) and Carly Corinthos (Laura Wright) are two strong willed women. They are both mothers of very different children. Carly is the mother of Michael Corinthos (Chad Duell). Micheal is a well respected and hard working young man. He has been the CEO of the company ELQ. Nina is the mother of Nelle Benson. And, General Hospital fans know Nelle was a troubled woman who did many things that hurt people.

At one time on General Hospital, Nelle and Michael dated. Carly was not happy that they were together. Nelle and Carly shared a complex history. Nelle had caused some trouble for the Corinthos family when she came to Port Charles. However Nelle was the reason that Carly’s daughter Josslyn Jacks (Eden McCoy) had been able to get a life saving kidney transplant. Jasper Jacks AKA Jax (Ingo Rademacher) got Joss a kidney by getting it from Nelle who did not give her consent for the operation.

It both brought Nelle close to and away from the Corinthos family. Michael and Nelle stayed together and found out that they were going to become parents. Many problems happened and Michael and Nelle’s relationship came to an end. Nelle did not want Michael to raise their son. She arranged for Brad Cooper (Parry Shen) and Lucas Jones (Matt Trudeau) to raise her son. They named him Wiley (Eric and Theodore Olson). Then she told Michael that their son died. However later Michael found out that Wiley was alive and been raised for a while by Brad and Lucas. Michael was reunited with Wiley.

Michael and Nelle had a custody case to see who would get full custody of Wiley on General Hospital. Nelle lost the case for different reasons. Michael had gotten married to Willow Tait (Katelyn MacMullan) to help his case. Nina testified against Nelle which helped Michael get full custody of Wiley. Nina felt badly that she had testified against Nelle even though she decided it was the right thing to do.

According to General Hospital spoilers, Carly was grateful to Nina for helping Michael get custody of Wiley. However Nelle tried to kidnap Wiley. She and Wiley went to a cabin in the woods. Later Carly, Michael, and Jax found Nelle and Wiley. Nelle tried to run away. Michael stayed with Wiley. Carly went to find Nelle. They fought and Nelle ran away. Carly found Nelle hanging from a cliff. She tried to save her but could not. Nelle fell from the cliff. Carly and Jax decided to keep it a secret. They also kept the secret that they thought that Nelle could be Nina’s daughter as well. Jax was dating Nina and did not want her feel the pain of finding out that Nelle was her daughter.

On General Hospital Nina knows the truth about Nelle. She has broken up with Jax over the secrets that he and Carly kept from her. Nina wants to have a relationship with Wiley who is her grandson. Carly is not sure if she wants Nina to be a part of Wiley’s life. She is concerned that Nina may try to influence Wiley in some way. Michael and Willow have decided that Nina can have a relationship with Wiley. Will Carly agree with Michael and Willow’s choice?

Will she stand in the way of Nina getting to know Wiley? Can Nina convince Carly that she will be a good part of Wiley’s life? Tune into General Hospital to find out if Nina and Carly can come to an agreement about Wiley.  Check back here for more General Hospital spoilers, rumors, and GH news updates.