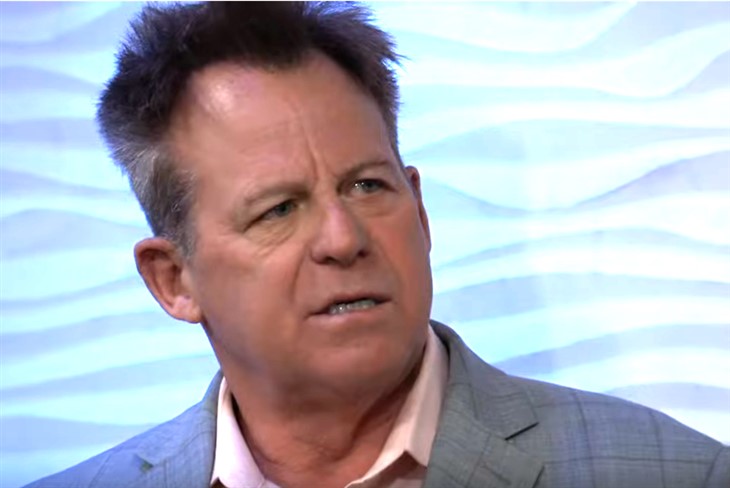 General Hospital spoilers indicate that from July 5 through July 16th things will be shaken up in Port Charles as Nikolas Cassadine (Marcus Coloma) will be reunited with Spencer Cassadine (Nicholas Chavez). Scott Baldwin will drop a bomb and Carly will grow suspicious of Austin (Roger Howarth). Anna Devane (Finola Hughes and Valentin Cassadine (James Patrick Stuart) will share a kiss as well.

General Hospital’s Anna will burn her finger and Valentin will kiss it and make it better. However, Anna is surprised when Valentin goes as far as to kiss Anna on the lips as well. Valentin will push Anna to explore the relationship between them when she pulls away. Will Anna and Valentin give their relationship a try? Meanwhile, Britt Westbourne (Kelly Thiebaud) will connect with Jasper Jacks (Ingo Rademacher) after Jason Morgan (Steve Burton) has walked away from her to marry Carly Corinthos (Laura Wright).

General Hospital’s Brook Lynn Quartermaine to be careful around Maxie Jones (Kirsten Storms). Monica has no idea who the baby belongs to but realizes that Maxie just lost her child. Ava Cassadine (Maura West) will comfort Trina Robinson (Sydney Mikayla) after her gallery ordeal. All the while, Phyllis Caulfield (Joyce Guy) will encourage Sonny Corinthos (Maurice Benard) to visit Nina Reeves (Cynthia Watros) in Port Charles.

General Hospital’s Carly will want to know what Austin is up to when he begins to ask questions about the hospital wing built in honor of Michael Corinthos (Chad Duell). Can Carly get to the bottom of who Austin is? Nicholas will reunite with his son Spencer. Will Nik realize that Spencer is the stalking and all the threats against Ava.

General Hospital’s Curtis Ashford (Donnell Turner) will once again scold Stella Henry (Vernee Watson over her interference between himself and Jordan Ashford (Briana Nicole Henry). Can Curtis and Stell get past her interference? Can Curtis clear things up with Portia Robinson (Brook Kerr)?

General Hospital’s Brando Corbin (Johnny Wactor) will finally get answers out of Sasha Gilmore (Sofia Mattsson). Will Sasha opening up lead to a romance for these two? Scott Baldwin will make a huge announcement, does it have to do with Austin? Will Brook Lynn slip up and tell Nina the truth about baby Bailey (Harper and Scarlett Bloom)? Sonny waits for Lenny Caulfield (Rif Hutton) to come home because he heads to Port Charles. Phyllis will encourage Sonny to go after Nina but warn him to not hurt her.