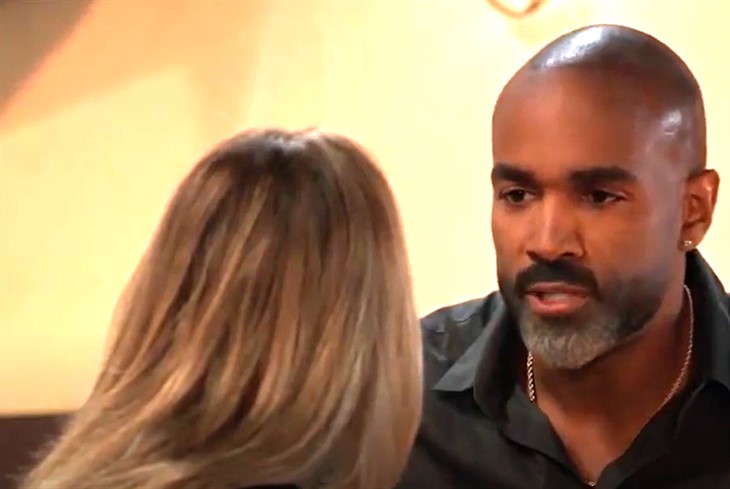 General Hospital viewers will recall that Curtis and Jordan went chasing leads in Astoria, Oregon a few weeks ago. Curtis had found out that there was a house on Wilson Street where Cyrus Renault (Jeff Kober) had been protecting someone special. They didn’t find much-the person had been moved. But what they did find showed that the person needed special care.

There was an empty oxygen tank, pill bottles, and other evidence that someone ill had been cared for there. Then Laura Collins (Genie Francis) showed up quite unexpectedly-chasing the same lead! Jordan showed her the redacted file that Cyrus had requested from her, a very old case. Laura saw it was the case file of a murder she had committed as a teenager! After Curtis and Jordan left, she called Scott Baldwin (Kin Shriner) and told him they were in trouble!

General Hospital spoilers show Curtis does some more digging, after following another lead out of town. The out-of-town lead seems to lead right back to Port Charles! But it is the Port Charles of the late 1970s, and Curtis finds out Laura knows more than she let on about the mystery case! Curtis is the last one to judge someone for their past; he has drugs in his. He will likely talk to Laura about what he’s found and offer to help!

GH Spoilers – Why Would Cyrus Renault Be Interested In A Case That’s Been Settled?

Curtis can’t figure out why Cyrus would be interested in a case that’s been settled for years. Laura can’t be tried again for a murder she committed as a teenager and did probation for! Maybe Cyrus wants to create a scandal to get her out of the Mayor’s office? Laura doesn’t really want to talk about it very much but agrees that might be a possibility. Curtis hates to even bother her considering what just happened to her daughter, Lulu Spencer (Emme Rylan) but Laura knows her duties as mayor don’t just stop because of a family crisis!

She had to give a press conference right after the Floating Rib blew up, not even knowing if Lulu had been dead or alive! In the back of her mind she’s much more worried about the other murder she committed as a teenager not long after that of David Hamilton (Jerry Ayres). She and Scotty could be prosecuted on that one because he and Rick Webber (Chris Robinson) covered it up! She doesn’t breathe a word about it, but she does offer as much information as she knows and remembers about Hamilton himself.

She remembers that he had two children and a wife whom he said had perished in the collapse of their home. Hamilton survived, but was in a wheelchair and later got the use of his legs back. Curtis starts thinking he needs to start digging into David Hamilton’s past and how that house collapsed, and if there could be a connection between Hamilton and Cyrus! Laura thinks he’s on to something, but that’s an awful lot of years ago! It won’t be easy!