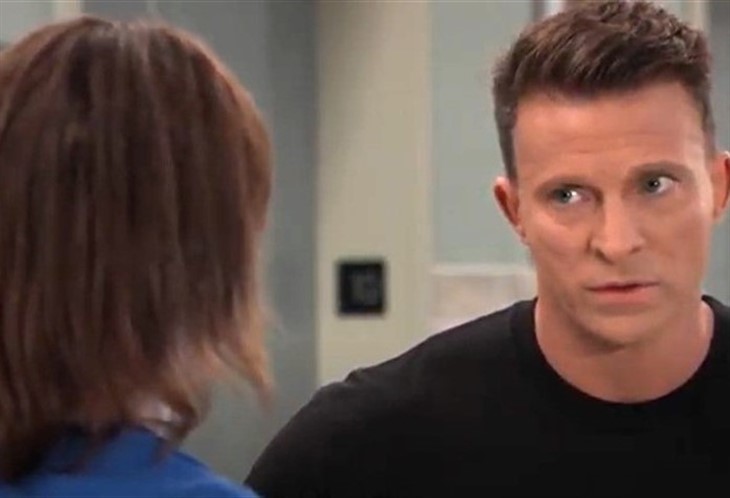 General Hospital (GH) spoilers indicate that Liz Baldwin (Rebecca Herbst) will go off on Jason Morgan (Steve Burton) for agreeing to Franco Baldwin’s (Roger Howarth) request. However, Franco is the one who approached Jason about killing him on the soap opera. GH spoilers reveal Jason didn’t approach Franco or threaten him.

General Hospital spoilers say Liz will approach Jason about Franco’s request to kill him. It is unclear how Liz will find this out unless Franco opens up about his decision. However, Jason has a lot going on at the moment. Jason’s best friend is missing and presumed dead. Liz should not be approaching Jason about anything at the moment. However, GH spoilers indicate Liz may get more of what she asks for when she comes at Jason this time. After all, Franco is the one who used his tumor as an excuse for everything he did in the past. Jason has every reason to want to protect everyone from Franco’s vengeance. However, Liz will never see this from Jason’s point of view.

General Hospital’s Franco would have never approached Jason if he wasn’t afraid of going dark again. Franco is afraid that he might hurt someone, especially Liz of the kids. Franco doesn’t want to risk hurting the people he loves so he asked Jason to kill him. Did Liz expect Jason to turn Franco down knowing their history?

a quick General Hospital recap shows Franco pretended to rape Jason’s wife. Franco tried to kill Jason’s infant son. Franco tied Lulu Spencer (ex-Emme Rylan) to a bomb and almost killed her. Franco knows that Jason will carry through with his wishes. Why should Liz blame Jason for that?

General Hospital’s Liz has made excuses for Franco for years. However, there is no excuse for everything Franco has done. Franco says that he got lucky with the tumor excuse. Franco has done things since the tumor that proves not everything is tumor-related. Franco knows that no one else would grant his request. Why is Liz against someone doing what Franco asks?

Does Liz not realize that the monster Franco used to be could come back at any time because of this tumor? Would Liz want someone to strap her or one of her children to a bomb? How can Liz trust Franco to know her and her children are safe if the tumor starts to mess with his head?

General Hospital Spoilers and Rumors: Bobbie Attempts To Distract Ava – She's Getting Close To Where Florence Is https://t.co/FYMYD58wio

General Hospital’s Liz will jump at any chance to blame Jason for something. However, Jason is trying to protect not only his family but Liz and her family as well. Is Liz being unfair to Jason for simply doing what he feels completely justified in doing?

Be sure to catch up on everything happening with GH right now. Come back here often for General Hospital spoilers, GH news, and ABC soap opera updates.