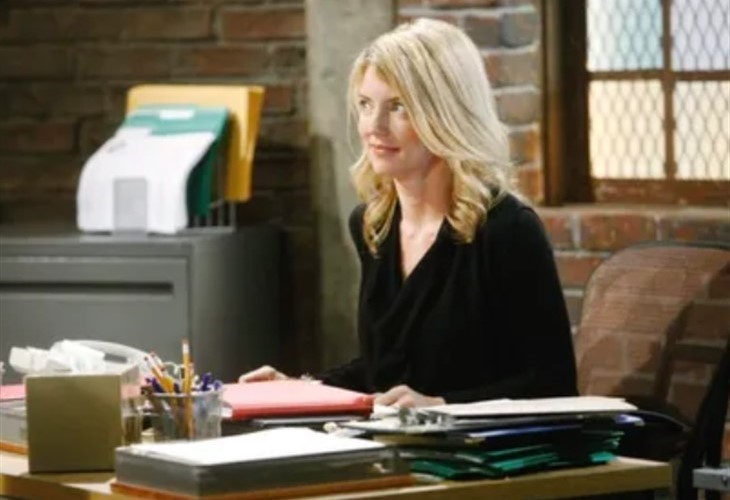 General Hospital (GH) spoilers tease that in Port Charles, NY Nina Reeves (Cynthia Watros) is wise to Valentin Cassadine’s (James Patrick Stuart) machinations, and she will let him know it in an upcoming episode of General Hospital!

General Hospital viewers will recall that Valentin wanted Nina to be mommy to Charlotte Cassadine (Scarlett Fernandez) after Dante Falconeri (Dominic Zamprogna) returned to Port Charles. He was concerned that Dante would be a danger to Charlotte, and he was getting ready to try to amend his and Lulu Spencer’s (Emme Rylan) custody agreement. Of course, after the explosion of The Floating Rib and Lulu’s indefinite coma, Valentin had to step back and do things differently. He is the only parent of Charlotte capable to take care of her now, and now he worries Dante may not be safe around her even more.

Valentin noticed Dante kind of spaced out when he was working out playdate schedules for Charlotte and Rocco Falconeri (O’Neill Monahan). Valentin had clicked his pen but hasn’t quite put together the cause and effect of the pen click yet, and had asked Anna Devane (Finola Hughes) to check on Dante – she found something a little off, too, but didn’t have need to use a pen.

Now there is even more need for Nina to officially take care of Charlotte since Lulu is in an indefinite coma, and grandma Laura Collins (Genie Francis) is involved in being the Mayor and trying to solve the problem that is her half-brother Cyrus Renault (Jeff Kober)! Valentin will likely call on Nina to spend more time with Charlotte, and try to convince her that Charlotte needs both her and her Papa with her during those visits! Nina will think that Valentin is taking advantage of the situation so he can get more time with her as well as Charlotte!

GH Spoilers – Nina Reeves Tells Valentin Cassadine She Knows What His End Game Is And She’s Not Falling For It!

Nina tells Valentin she knows exactly what his end game is, and she’s not falling for it! She tells him in no uncertain terms that there is absolutely no reason that Valentin has to be present for her times with Charlotte. Valentin tells her there is danger around, and he wants to make sure that Charlotte feels safe and also that she is safe, along with Nina. Nina tells Valentin that is what Jasper “Jax” Jacks (Ingo Rademacher) is for.

That will really rankle Valentin, although he will try not to lose his temper. He might remind her that Jax has his own daughter to protect considering the mob situation and the “death” of Sonny Corinthos (Maurice Benard) her stepfather! Nina, of course likely knows that Jax offered to take Josslyn Jacks (Eden McCoy) to Australia and tried to convince her to go, but she refused.

Valentin might ask her did he offer to take Nina to Australia also? Nina won’t say but she will probably say she wouldn’t be able to go because she has to run Crimson. That is, if Valentin is even aware of the situation between Jax and Joss. Nina may not have told him and he wouldn’t have reason to hear it from anyone else, not being associated with the Corinthos family to any great extent. Nina flat out will tell Valentin she’s not falling for his excuses and his plan to include himself in her times with Charlotte!