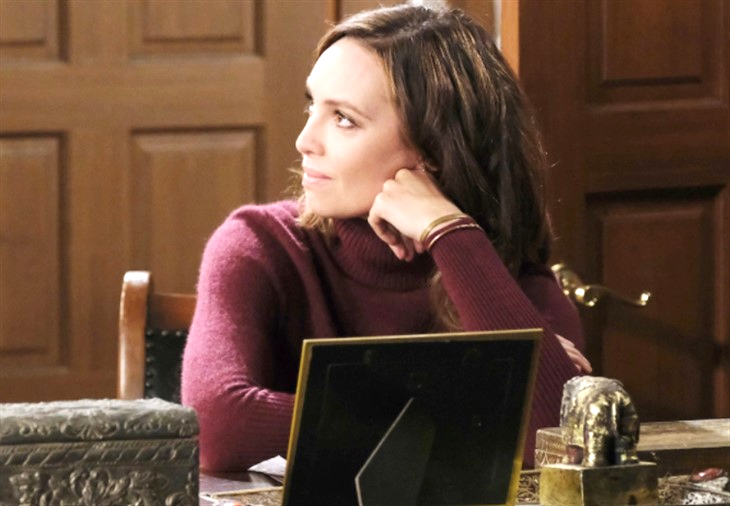 Days of Our Lives (DOOL) spoilers reveal that this week, Gwen Rizczech’s secret is finally going to come out. However, don’t expect it to be one thing that has set Gwen on this path of destruction. It is multi-layered. Actress Emily O’Brien teases that one part of the secret viewers will never guess. Keep reading to find out what else the DOOL newcomer had to say about Gwen’s secret.

DOOL spoilers reveal that the most popular theory regarding Gwen’s secret is that she is Jack Deveraux’s (Matthew Ashford) daughter. Some fans believe that she hates Abigail DiMera (Marci Miller) so much because she has everything Gwen thinks she should have had too. That theory might turn out to be accurate, but O’Brien told Soap Opera Digest that there is more than one part of the secret and nobody will ever guess what it is.

So, if this is a multi-layered secret with more than one part, what else could Gwen be hiding? That’s hard to say, but the actress did tease it would make people empathize with Gwen. Fans find that hard to believe because of how much she has done to try and destroy Abigail’s life.

She intentionally tried to melt Abigail’s brain with the drug she got from Dr. Wilhelm Rolf (William Utay) on Days of Our Lives. She slept with Chad DiMera (Billy Flynn) and bragged about it to Abigail. She tried to prevent Jack and Jennifer Horton (Cady McClain) from getting back together. Set up the Kate Roberts DiMera (Lauren Koslow) affair to be exposed at the anniversary party and so much more. So, for viewers and other characters to have sympathy for Gwen, it must be something truly horrendous that made her go to these extremes.

Days of Our Lives spoilers reveal that O’Brien said that one part of the secret nobody will ever guess. So, it must be something that is completely unexpected. Are we talking about murder? Someone being sent to prison for a crime they didn’t commit? It’s impossible to say right now, but we will find out soon enough.

Even though the secret will reportedly make people sympathize with Gwen, she will remain an outcast. The actress also said that Gwen has severe trust issues, which is most likely connected to the secret.

Days Of Our Lives Spoilers: Kristen Threatens Chloe After Brady's Hospitalization – Puts Out A Hit On Her? #DOOL #Days #DaysOfOurLiveshttps://t.co/lGY7REPB3M

“Even with this reveal coming out, it still makes her an outcast and she finds it very hard to trust anyone. She definitely struggles to find her place. And struggles to trust.  Trusting is a very new experience for her.”

What do you think the different parts of Gwen’s secret are on Days of Our Lives? What could be so horrible that it would actually make people empathize with her?

Be sure to catch up on everything happening with DOOL right now. Come back here often for future Days of Our Lives spoilers, DOOL episode news, and soap opera updates.