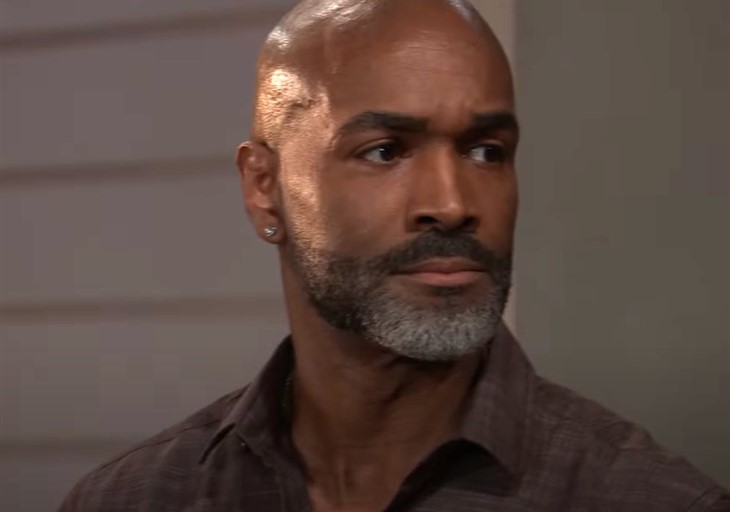 General Hospital spoilers tease that the residents of Port Charles have had it up to THERE in this week’s General Hospital weekly preview, called “Take, Take, Take!” They have taken enough from Cyrus Renault (Jeff Kober) and Peter August (Wes Ramsey) and they can’t take anymore! Could it be true – could General Hospital lose two villains in the same week?

General Hospital viewers will remember that last week, a desperate Cyrus Renault, who had been shot in the shoulder on Pier 55, apparently broke into the home of Portia Robinson (Brook Kerr) and her daughter, Trina Robinson (Sydney Mikayla). Cyrus wants to force Portia into fixing him up and removing the bullet. Portia was taken aback when she saw her front door was unlatched and there was blood on the floor, only to be greeted by a wild-haired and crazed Cyrus, demanding her help! Now a hostage situation is happening at the Robinson house, strapped off with crime scene tape.

Dr. Kevin Collins (Jon Lindstrom) and Mayor Laura Collins (Genie Francis) stand near a front window with a plainclothes policewoman, looking in, as Curtis Ashford (Donnell Turner) stands a few feet behind them, also looking towards the house. Behind Curtis is Port Charles Police Commissioner Jordan Ashford, (Briana Nicole Henry) with Trina’s father Marcus Taggert (Réal Andrews) beside her. Cyrus better not have hurt Trina, or Marcus will END Cyrus right then and there! Kevin and Laura appear to be there as hostage negotiators, as another scene from the promo shows a weary and desperate Cyrus with Laura trying to calm him down.

General Hospital spoilers reveal that Maxie’s plan to protect her baby didn’t quite go as planned. Crazy Fake Nurse Chloe Jennings (Kimberly J. Brady) kidnapped her to Pautuck, New York while Brook Lynn Quartermaine (Amanda Setton) worried back in Beecher’s Corners, New York where she was waiting for Maxie to meet up with her. Instead, baby Louise had other plans and as Maxie had fled into the woods, Louise apparently felt like she was running out of the womb and made her entrance into the world with the help of a kind, if eccentric, doctor, who only gave the name of Austin (Roger Howarth).

Unfortunately, Crazy Chloe had clobbered the good doctor and chased after Maxie and newborn Lu with a fireplace poker – Maxie, however, had gotten the best of her when she lured her onto an unstable “floor” over either an old well or perhaps Austin’s bear trap. Chloe fell through to the bottom, but now, after Brook Lynn has apparently arrived and Maxie talks to her with a lot to tell, Maxie is seen collapsing in tears, minus her baby, and apparently Brook Lynn lying flat on her back knocked out, with them still in the woods! Austin was dressed a little strange, but he wasn’t wearing leggings so that must be Brook Lynn’s foot over to the left in the scene!

General Hospital viewers will recall that last week began with Peter bleeding out at the bottom of a stairwell at General Hospital, and then the timeframe went backward. Apparently, it continues to go backward as Peter is seen on the roof of GH calling someone on the phone, possibly the helicopter seen flying overhead. Inside the hospital, a terse Elizabeth Baldwin (Rebecca Herbst) is talking to Dr. Hamilton Finn (Michael Easton) who is looking serious!

GH spoilers show Elizabeth talks about how Peter took Finn’s relationship with Anna Devane (Finola Hughes) away, as a shot of Anna is shown, how Peter took Liz’s husband away, and standing by the top of the stairs as a sign to the stairways is seen close to Finn’s head in the shot, Liz has had enough! She tells Finn that Peter doesn’t get to take anything else from them!

Is it the end of both Cyrus and Peter? Stay tuned to General Hospital, and keep checking General Hospital spoilers frequently for all the latest news, updates, and developments!

Find Out More About The Cast Of The Latest 90 Day Fiancé Spinoff 90 Day: Foody Call