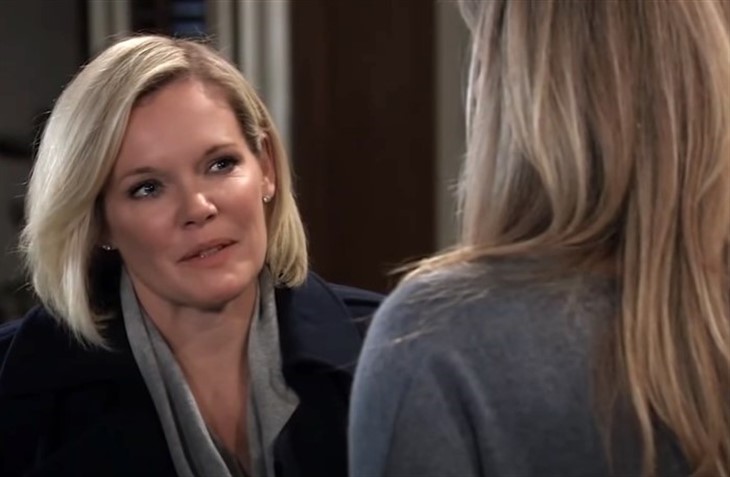 General Hospital (GH) spoilers for Friday, April 30, 2021, reveal Carly maybe finding a solution to her problems and Nina once again watching her back in Nixon Falls.

Ava (Maura West) was left with chills after her encounter with Cyrus (Jeff Kober) and his cryptic words when he saw Avery’s picture. She immediately assumed (and probably assumed right) that Avery’s life could be in danger if Cyrus decided to use her little girl for leverage. This led Ava straight to Carly (Lauralaura Wright).

Ava suggests that perhaps she and Carly put both their minds and their numerous resources together to stop Cyrus. When Carly learns he is threatening Avery, she’s willing to listen to Ava and maybe work with her. After all, Ava also really, really wants the mobster out of Nikolas’s (Marcus Coloma) life.

Speaking of Nikolas, he may have made a huge error in judgment getting Alexis (Nancy Lee Grahn) protection in jail. Alexis learns that when you get special treatment behind bars it can also put a target right on your back. After all, she gets a new job in the jail. And this job is a better job. Better jobs don’t usually happen for brand-new inmates.

As Josslyn (Eden McCoy) and Trina (Sydney Mikayla) attempt to track down her father, Jax (Ingo Rademacher) is feeling better and ready to make his way back to Port Charles, but not before he nearly runs smack dab into Sonny (Maurice Benard) again.

Nina (Cynthia Watros) has to do some juggling to make sure they don’t see one another. When her plan works, she returns to the Tan-O where she and Sonny grow closer.

Back in Port Charles, Elizabeth’s (Rebecca Herbst) life and the life of her family take a few dramatic turns. Britt (Kelly Thiebaud) wants to speak with Liz about her status with the hospital. Does she lose her job or get more hours? After all, things changed for Elizabeth’s career when Cyrus and Britt took over.

Also, Cameron (Will Lipton) decides to confront Jason because he is still convinced that Jason (Steve Burton) murdered Franco (Roger Howarth). Can Jason manage to convince Cam that’s just not true? Stay tuned to General Hospital weekdays to see how these stories play out.