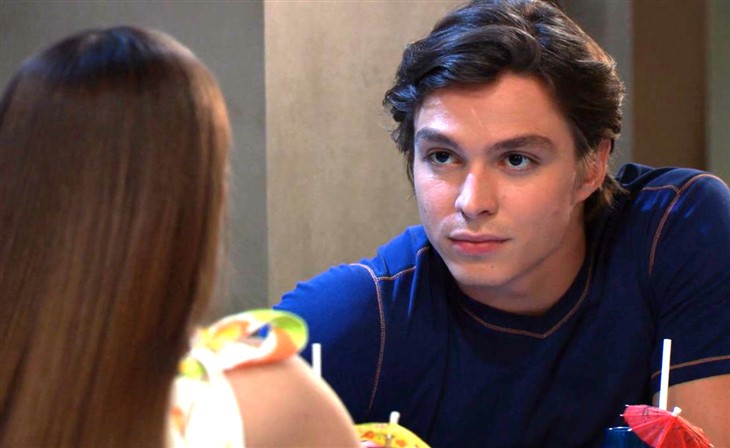 General Hospital (GH) spoilers indicate that in Port Charles, NY Spencer Cassadine (Nicholas Chavis) will finally confess to Nikolas Cassadine (Marcus Coloma) that he is Ava Cassadine’s (Maura West) stalker. Nik will be furious with his son. Spencer will end up being arrested for stalking. Will Esme Prince Avery Kristen Pohl) get arrested too?

General Hospital’s Trina Robinson (Sydney Mikayla) was determined to get to the bottom of Ava’s stalking. Trina knows that Esme and Spencer have been working together and plans to prove it. Trina has enlisted the help of Cameron Webber (William Lipton) and Jocelyn Jacks (Eden McCoy) to prove this is true. It is unclear at this time if Trina will find the evidence she needs or if Spencer simply feels guilty over what he has done and confesses to his father. However, once the truth comes out, Spencer will be arrested for the crimes against Ava and Avery Corinthos (Ava and Grace Scarola). Will Nik be the one who has Spencer arrested? Will Spencer reveal his accomplice or cover for her?

General Hospital’s Esme could continue to go after Ava to try to prove that Spencer is innocent. However, Spencer has already confessed to his father what he has done. Spencer could be willing to take the blame to protect Esme. However, Esme could decide to move against Avery again and Sonny Corinthos (Maurice Benard) would not be happy. Sonny is now home to protect his daughter and it doesn’t matter who goes to jail. Sonny may be determined to put Esme away. Sonny could even put out a hit n Esme for terrorizing Ava and Avery. Esme’s time could be shorter than what she thinks.

General Hospital’s Spencer knows that Esme is new in town and would not be there if it weren’t for him. Spencer could blame himself for Esme being involved in the stalking plot at all. However, Esme could be just using Spencer to stalk Ava for her own purpose. After all, who offers to help stalk someone for no reason? Could Esme have an ulterior motive for stalking Ava? Could Esme be stalking Ava for her own purpose? After all, GH rumor suggests that Esme could be Ryan Chamberlain’s (Jon Lindstrom) daughter. Is Esme simply out to get revenge on her father’s ex-lover?

It seems that Spencer will finally pay for his crimes against Ava, will Esme pay as well? Will Ava have sympathy for Spencer and refuse to testify against him? Will the truth about Esme ever come out?