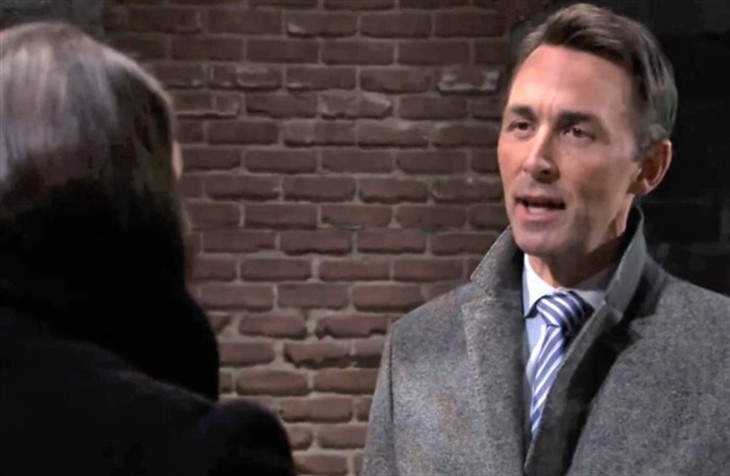 General Hospital (GH) spoilers tease that Brook Lynn Quartermaine (Amanda Setton) has once again put into action a crazy plan without thinking about the possible ramifications. In this case, by pretending to carry Valentin Cassadine’s (James Patrick Stuart) baby in order to con him into returning the ELQ stock he conned her out of.

General Hospital viewers may remember that Brook Lynn was under an iron clad contract with her agent who had made it clear that he wouldn’t put any effort into Brook Lynn’s singing career if she didn’t sleep with him. But he had no intention of releasing her from his control. As it turned out, the agent was working for Valentin.

General Hospital Spoilers – Brook Lynn Quartermaine Gave Her Agent Her Shares In Order To Be Released From His Contract.

Brook Lynn Quartermaine was shocked her unscrupulous agent told her that the only way he would release her is if she signed over her ELQ shares to him. After much debate, Brook Lynn had figured out that Valentin was behind her agent’s ultimatum. But she agreed to the deal anyway after she researched Valentin’s business acumen and truly believed he would be good for ELQ.

General Hospital spoilers show Valentin also admitted he had no idea about the sexual harassment that Brook Lynn endured and he made sure the agent knew that he wasn’t pleased. So although Brook Lynn was able to take control of her music career once more, she wasn’t ready for her father’s reaction.

Ned Quartermaine (Wally Kurth) had been so invested in ELQ, he didn’t realize he was pushing Brook Lynn away and eventually they got into an argument so bad that Brook Lynn was told to leave the Quartermaine Mansion.

Not long after, Nelle Benson (Chloe Lanier) slashed Brook Lynn’s throat on General Hospital and she still hasn’t been able to recover her singing voice. One night Brook Lynn and Valentin found comfort with each other. She left town not long after, but she seemed to think she might be pregnant even than because she had a pregnancy test on her.

By pretending to carry Valentin’s baby, Brook Lynn may not realize that she is playing with fire. Valentin takes being a father very seriously and was genuinely thrilled when Brook Lynn revealed she was with child. And while he certainly played dirty with his con job and sexual harassment that Brook Lynn had to endure making Valentin think she is going to give him another child is more cruel than Brook Lynn will intend but making an enemy of one of the most dangerous men in Port Charles doesn’t seem to be of any concern to Brook Lynn, but once the truth comes out there is no telling what Valentin may do.

How long can Brook Lynn continue her game with Valentin on General Hospital? Has she even considered how angry he will be when he learns the truth. Should she worry that he will come after her or will he let it go considering the con job he pulled on her?

The game of cat and mouse will only grow more intense between these two, so stay tuned to General Hospital airing weekdays on ABC. And don’t forget to check back right here regularly for all your General Hospital news, information and spoilers!

Adam Levine Slays Instagram In Dress To Show Off Tattoos