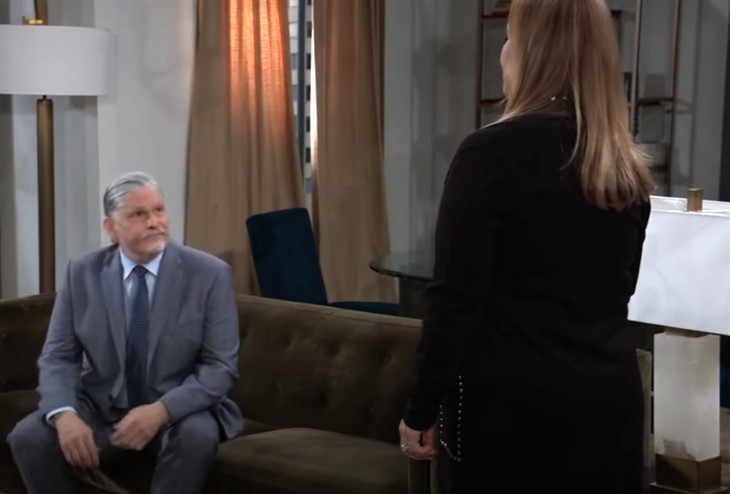 General Hospital (GH) spoilers tease that in Port Charles, NY Cyrus Renault (Jeff Kober) seems to want two things more than anything. First he wants his mother, Florence Grey (Annie Abbott) to love and approve of him, despite his criminal lifestyle. And now that he has found out that he and Mayor Laura Collins (Genie Francis) share the same father, he wants Laura’s love and attention as well.

But even if Cyrus gave up his criminal activities, he is responsible for the explosion that left Laura’s daughter, Lulu Spencer (Emme Rylan), suffering from severe brain injuries. Lulu has been comatose ever since and is now being treated at a long-term care facility out of Port Charles. So Cyrus has been looking for a way to form a relationship with his newfound sister any way he can. He even made sure that Laura was disillusioned with her other instant brother, Martin Gray (Michael E. Knight) so much so that she rescinded an invitation for a family Easter gathering.

General Hospital Spoilers – What Will Cyrus Renault Do Next To Get Laura Collin’s Attention?

Cyrus might decide to get close to Nikolas Cassadine (Marcus Coloma) perhaps even arranging for Spencer Cassadine (last played by Nicholas Bechtel) to forgive his father and return to Port Charles. Although Nikolas might be grateful, he likely won’t help Cyrus get closer to Laura. But what about Dr. Kevin Collins (Jon Lindstrom), Laura’s husband? Perhaps Cyrus will use his position as Chairman of the Board at General Hospital to put Kevin’s job at risk. Maybe he will even set Kevin up on some sort of ethical charge, possibly because Kevin took the brain of serial killer Cesar Faison (Anders Hove) to study in the hopes of understanding his own serial killer brother, Ryan Chamberlain (also Jon Lindstrom) and possibly curing him of his dark impulses. Kevin’s tactics could certainly seem to be out of the norm, but his goals are noble. He would likely rather fight any charges of impropriety than let Cyrus make the problem go away.

Cyrus could also use Ryan himself against Kevin. Perhaps he could have Ryan taken from his low security prison hospital cell and threaten to kill him or even worse, make sure Ryan recovers enough to set him loose on Port Charles once again. Kevin might give in to prevent Ryan from starting another killing spree. But would even he be able to convince Laura to give Cyrus a chance and accept him as her brother? Kevin is a therapist so he knows how to use just the right words to get the response he wants. Or would Laura see through it and demand to know why Kevin would ever defend Cyrus?

Will Cyrus find a way to get Spencer to return to Port Charles and forgive Nikolas? Would that be enough to get Nikolas to try to convince Laura to get to know her criminal brother? Or will Cyrus find a way to use Kevin to suit his needs? Will Laura see through Cyrus’ games or will she allow Cyrus in her life at Kevin’s suggestion? Mothers and sisters are Cyrus’ world, so stay tuned to General Hospital airing weekdays on ABC to see if he gets his way. And don’t forget to check back right here regularly for all your General Hospital news, information and spoilers.