Adam Levine Slays Instagram In Dress To Show Off Tattoos 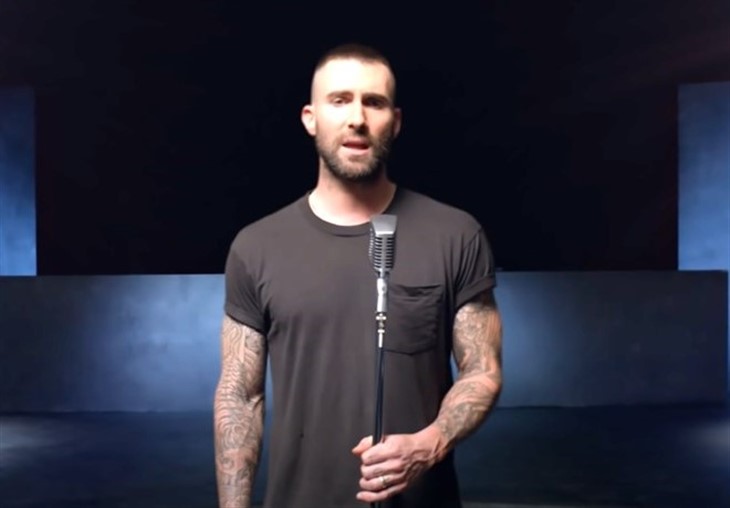 Adam Levine is famous for his singing, tattoos, and star role on “The Voice.” Now we can add “ability to wear a dress with style” to the 42-year-old singer’s credentials!

Levine just posted an Instagram pic in which he wears a dress as he poses with his family. The frock puts ALL his tattoos on his display, which makes an impressive contrast to his caption: “Girls Just Wanna Have Fun!”

Adam Levine Puts Tattoos And Dress On Display For Instagram

“Girls just wanna have fun,” according to Adam Levine. And apparently the Maroon 5 lead vocalist is including himself among those girls, at least when it comes to his all-female family.

Levine shared a new Instagram photo that instantly captured his followers’ attention. Not only does the 42-year-old singer share off his bounty of tattoos, but he dares to earn a comparison with his gorgeous model wife Behati Prinsloo, 32, by modeling a dress just like hers.

Add in his daughters, who are also pictured in the photo, and it’s cuteness overload time! 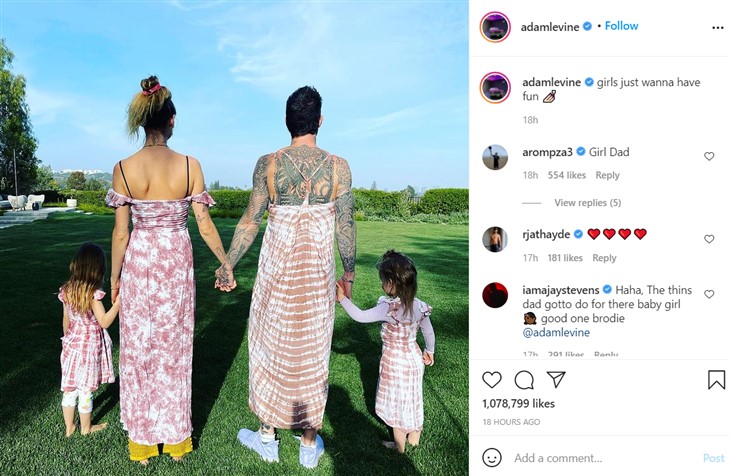 So who exactly is joining Adam and Behati in that photo? Levine is a proud daddy to two little girls.  Joining mom and dad in wearing tie-dye sundresses in the picture are Dusty Rose, 4, and Gio Grace, 3. So far, the little girls apparently aren’t begging for tattoos to match their famously inked father!

The scene appears to be taken from their mansion in Pacific Palisades, California. It has three acres and is estimated to be worth $32 million.

Behati and Adam tend to be cautious about sharing photos of their daughters. The newest family portrait is typical of that caution, with only their backs showing. They also sometimes use filters, as when the Victoria’s Secret model wished her daughter a happy 3rd birthday.

So do Levine and his model wife want more children? Adam has said that Behati is happy to be the mom to two daughters right now.

The Voice: Adam Levine & Blake Shelton – The Truth About Their Bromancehttps://t.co/uvSGoNmaUc

“I think if I asked her to have another baby right now she’d punch me in the f—ing face because she’s not ready,” joked Levine. “We’re good. We’ve got two kids.”

In addition, Prinsloo has been quick to deny pregnancy rumors. The most recent round of claims that she was pregnant again occurred when a blurred photo was shared on her Instagram.

“Guys. This is not an ultrasound lol,” clarified Adam’s wife.  It was just a close-up photo of her sweatpants that one of her daughters had posted.  “But everyone is now congratulating me on my 3rd pregnancy,” she noted.

However, Behati also has said that she’s not adverse to the possibility of having more kids, noting, “I grew up an only child, so I always wanted a big family.”

And whether it’s a boy or a girl, we’re betting that Adam will be happy to add to his “girls just wanna have fun” crew!